The Sports Pavilion has since become the focus of many great sporting encounters, whether it be rugby, football, cricket, tennis, athletics or rowing. It has become a place where parents and boys meet after home matches and the opposition are warmly entertained. 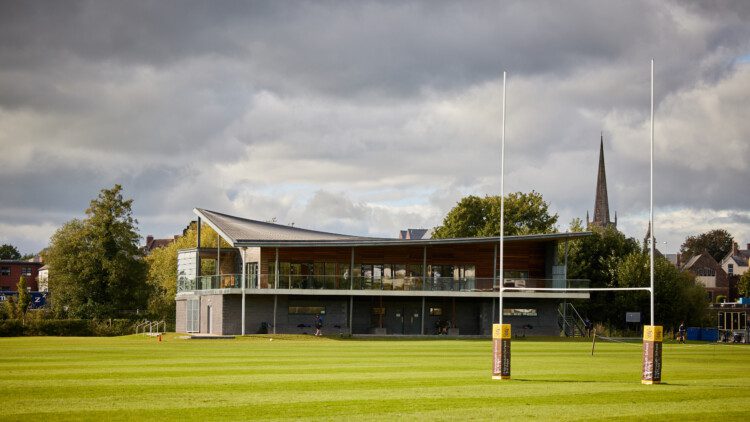 In 2008 Monmouth School for Boys marked the official opening of the £2.3 million Sports Pavilion.

The exciting and vibrant design incorporates a tall, double height, fully glazed main entrance and a spectacular double curve roof.  As well as changing and shower facilities, the new Pavilion has a dining and reception area and a balcony overlooking the playing fields and surrounding countryside, affording spectacular views up the Wye Valley.

Bill Lewis, who was a keen rower whilst a pupil at Haberdashers’ Aske’s, generously donated funds for a new rowing boat for the School which was named ‘Bill Lewis’ in his honour at the opening. This was particularly fitting in the year that Tom Lucy (OM 1999-2006) won a silver medal in the GB VIII in Beijing during the summer of 2008 at just 20 years old.

The event was concluded with a rugby match, refereed by former Monmouth School for Boys pupil Wayne Barnes, between the John Bevan XV and fittingly the Crawshay’s Welsh RFC XV, who had fielded a team at the opening of the previous pavilion in 1964.

Sports matches are played at the following address:

Set within its own grounds with ample parking, Monmouth School’s Sports Club is open to members of the public.

Sports Pitches - View from the Pavilion

Boathouse and facilities for rowers