The casting of this takes place in September and the final performance will normally be at the beginning of the Summer Term. Rehearsals are once a week in order to fit in with the busy lives (academic and non-academic) of those 6th Formers involved. The main aim of the Senior Play is to allow students to work in a professional environment, in a professional way, in order that they can produce a final performance which is of the highest possible standard.

‘It was going to be amazing…’ – Genna went to the woods to meet Paul. But she didn’t know it was being filmed… neither did all the friends who were waiting to jump out and surprise her. Only Scarlett knew and she’d waited a long time for this… ever since she was twelve. ‘Girl you don’t know…’ is a play about revenge; its rights, its wrongs and how it always leaves a really bad taste. 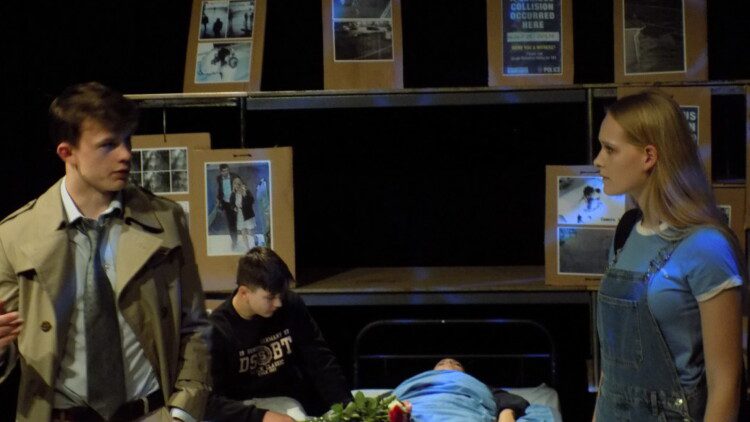 Due to unprecedented numbers auditioning for this year’s Senior Plays the beginning of May saw two productions take to the stage of the Drama Studio.

The first play was the scintillating ‘Not Gonna Lie’, starring Rhys, Amelia, Marcus, Gemma, Ella and Angelika, and it told the story of a group of friends whose lives are torn apart after a car accident. 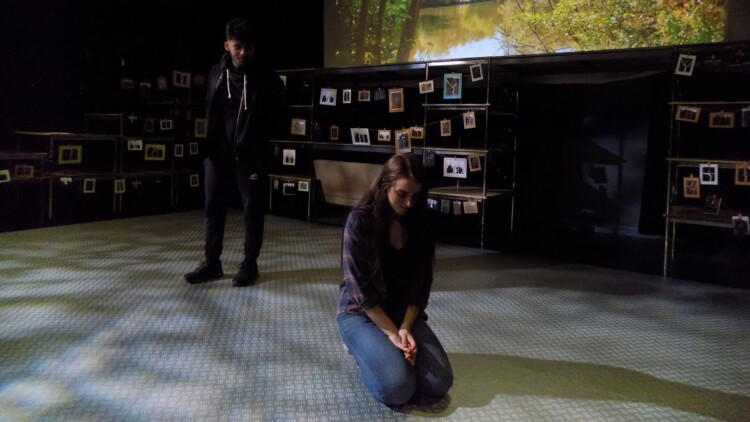 When the Good Guys Lost

This play shone a light on three sisters who had been split apart at the time of the death of their mother and it followed their story back to reconciliation with each other after this cataclysmic event. The cast of Usman, Carys, Eithne, Poppy, Owain, Jack and Angelika (ably supported by the ever-present Eleanor as the voice of Mum) put in a brilliant performance of this moving piece of theatre and the full house on Friday erupted into rightly deserved, rapturous applause.

‘It’s been an intense two weeks,’ said Mr Shakeshaft who writes and directs the plays, ‘but the students for both performances have been absolutely brilliant. The aim of the project is to give 6th Form students the chance to rise to the challenge of performing a play which is staged in as close to a professional environment as we can manage. Both casts this year have risen to this challenge both with their professionalism and their ability.’

Well done to all involved, and a big thank you to the teachers and members of staff who helped out with ticketing and serving drinks on the performance nights and, of course, to the audience who came along and enjoyed the productions.

This year the Drama Studio was transformed into a tense and troubling crime scene, as the stage was set for the World Premiere of Icarus’ Sister, written by drama teacher, writer in residence and professional playwright Mr Shakeshaft.

This taut crime thriller followed the story of missing teenager Claire Francis whose seemingly loyal group of friends turn against her under police questioning. The race is then on to try and discover the truth of why a young girl would disappear and seemingly no-one, but her father, wants her to come home. The nine strong cast, of 6th form actors, delivered a mesmerising production with particular mention going to Tobias and Millie for their commanding performances as the warring detectives Frett and Venn. They were ably supported by Ellie, Marcel, Wilfrid, Jemima, William, Rosie and Owain  and this ensemble of actors produced a fantastically professional performance. 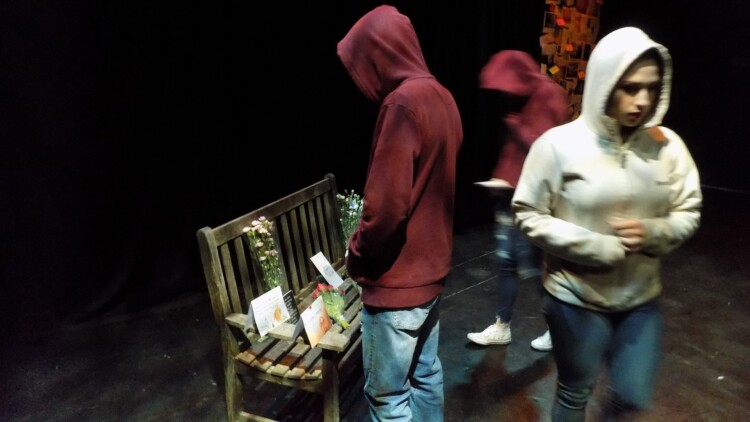 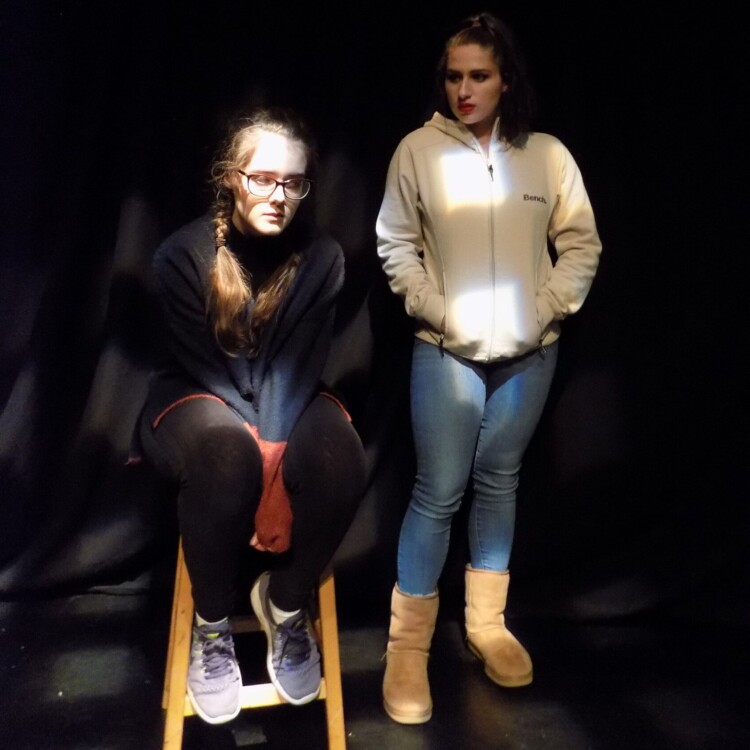 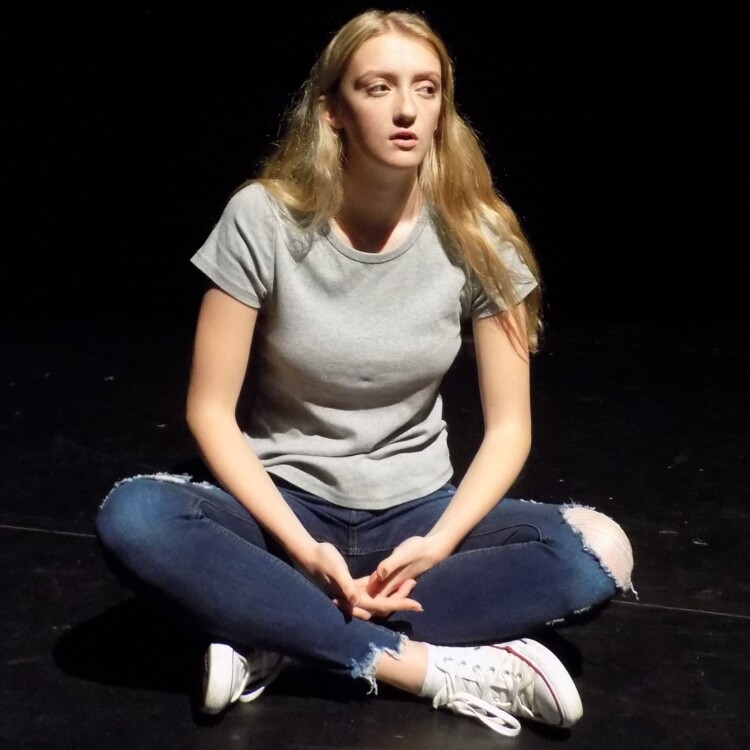 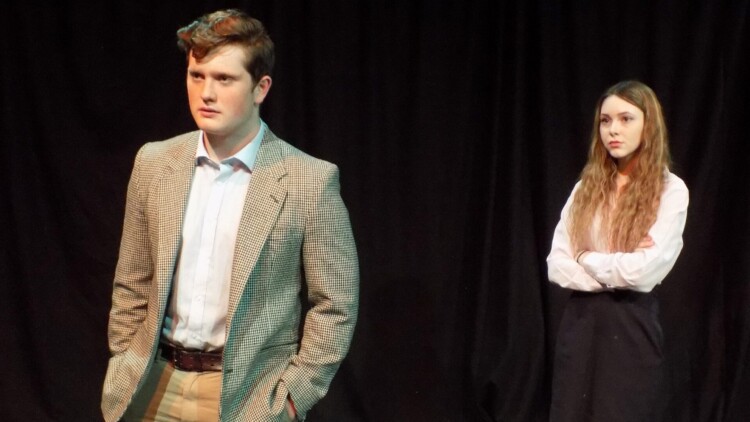 The Eggshell Crucifix told the story of a future in crisis. Free will has disappeared as everything must be done for the war effort. A group of housemates, thrown together by extreme circumstance must try and survive their environment and each other in order to, one day, hopefully make it back home… if home still exists.

The cast of Joe, Anna, Freddie, James, Charlie, Toby delivered a fantastic performance of this absorbing production and they truly transported their sell-out audiences to this petrifying vision of the future. 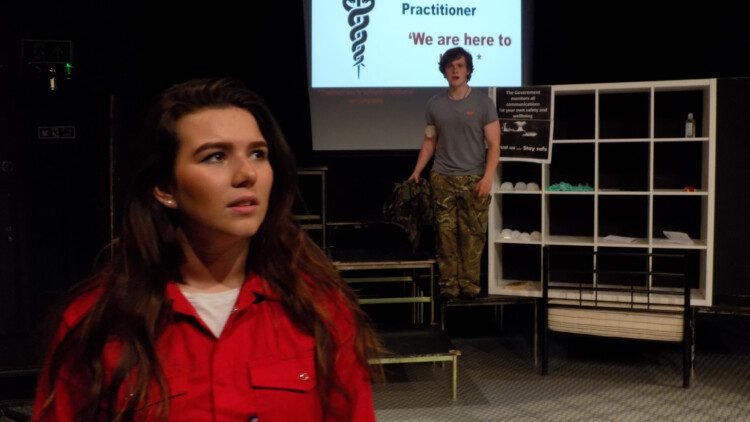 The first round of Senior Plays entertained sell-out crowds in the Drama Studio.

The two original plays, Working for the Company and The Lift, penned by drama teacher and professional playwright, Mr Shakeshaft, saw the sixth form cast expertly transport their audience to the future. Firstly to a dysfunctional modern company, where Wilfrid’s Pilbrow was gaining his revenge over James’ somewhat confused Dante. Then, in the second play, it was Jack and Oscar who were attempting to hang on to their futuristic farm, with the help of Will G’s scientist as Will T attempted to take everything from them. This was an excellent evening of entertainment and huge congratulations must go to all of the cast. 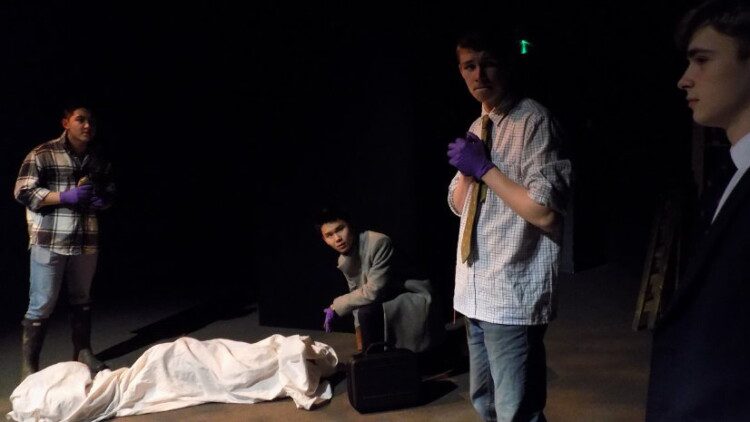 2016 - Cassandra Rising and We're Not in Brixton Anymore 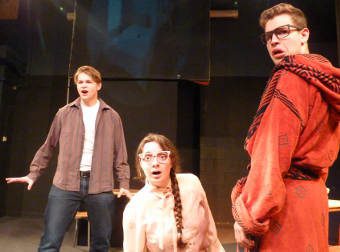 This year’s Senior play took the form of a double-bill of plays penned by Monmouth School for Boys drama teacher, and professional playwright, Mr Shakeshaft. The first half of the evening was the explosive, ‘We’re Not in Brixton Anymore’ starring Jack, Lucas and Ed as the hapless Tony and Bernie who are attempting to work out how they’ve ended up in God’s waiting room and why the third character, Charlie, is so much more clued up than they are… until all is shockingly revealed in the final moments
of the play.

After a relaxing interval the audience were invited back into the Drama studio for the world premiere of ‘Cassandra Rising.’ This was an exciting, ensemble comedy, brilliantly led by Joe and Jess, and fantastically supported by the comedic talents of Brittany, Hamish and Freddie, as they took us on a journey of lies, complications and love as the eponymous heroine attempted, not always successfully, to tell the truth about her life. Well done to all involved, who were left in no doubt, due to the thunderous applause, that the audience had thoroughly enjoyed their evening of original drama.

This year’s premiere of ‘The Argument’, starred Lucy and Chris as the warring couple Leon and Sophia. They were excellently supported by a range of their friends and family played by Joe, Megan, Brendan, Jess and Freddie. The three weeks of arguing which the play covered was exhilarating, at times humorous and, at its climax, joyously surprising. An excellent continuation of the Senior Play’s dramatic legacy as it enters its fourth year. 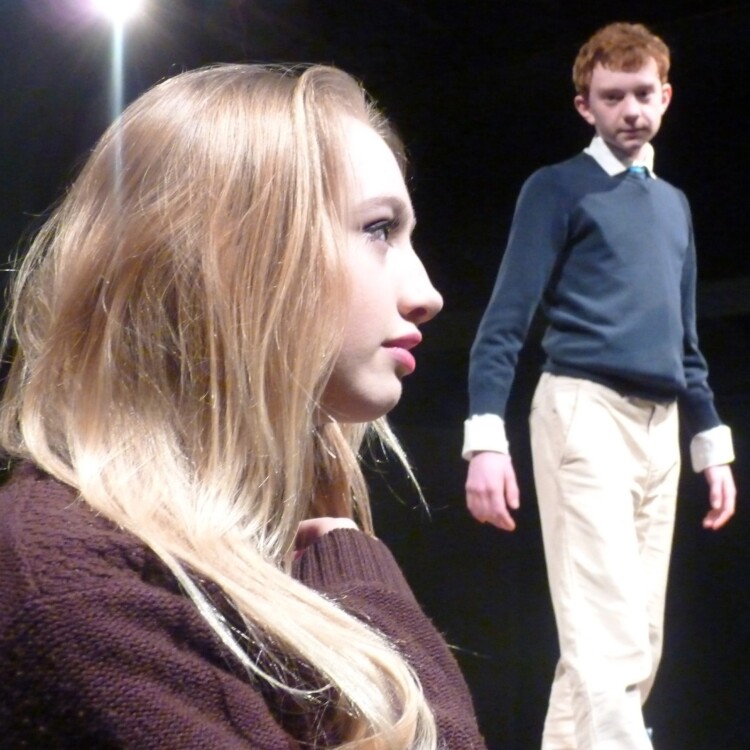 Following on from the success of last year’s ‘There were 7 of us’ a brand new play entitled ‘Rain Like Glass’ was written and produced by drama teacher, and professional playwright, Mr Shakeshaft this Summer.

‘Rain Like Glass’ told the story of Marcus, a young man heading off to London to try and escape the pressures of home life, but instead he walks into a world where his older brother is always bettering him and, when he tries to impress his new girlfriend Maria, he is thrust into a corrupt financial deal which threatens to ruin him and his family forever.

The performances from the cast of Paras, Sam, Lucy, Becky, Chris, Matthew, James and Hamish held the audience in the palm of their hand as the shocking climax of the play, and the reason for all of Marcus’ problems was revealed. An utterly professional performance which sees the senior play continue to set the highest of standards and leaves audiences incredibly impressed at the talent which is being exhibited at the top end of the school. 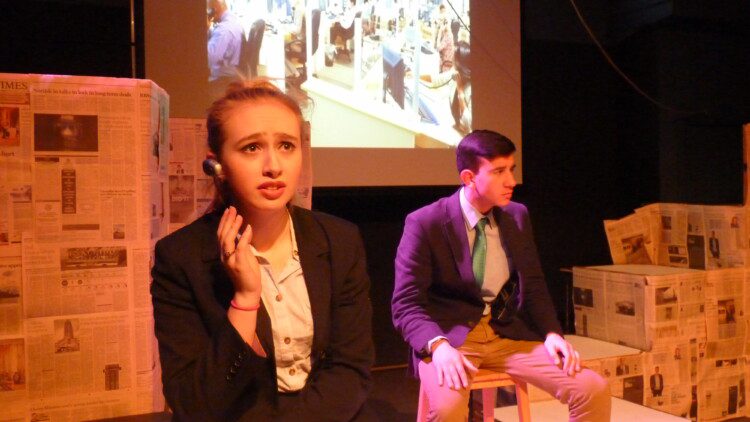 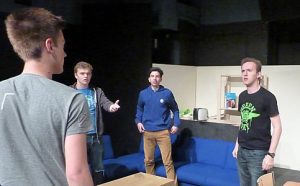 Summer 2013 saw a new venture from the Drama Department, in the shape of the Senior Play, as seven, senior actors from Monmouth School for Boys and Monmouth School for Girls, took to the stage to perform an original play penned by drama teacher and professional playwright Mr Shakeshaft.

‘There were 7 of us’ told the story of seven teenagers leaving school and spending one last holiday together before they are forced to go their separate ways, out into the world. Unfortunately disaster strikes on this holiday and the group, minus one of their members, is forced to revisit and relive that first time, as they try to come to terms with growing up in a world that is far removed from their innocent schooldays.

The cast of Henry, Paras, Sam, Francis, Brendan, Ruby and Hayley took the audience on a realistic journey of discovery with great skill and professionalism, worthy of many a professional acting company, and the closing moments of the play, as the cast screamed, panicked and hauled their audience from their seats in the Drama Studio and pushed them out of the door, will be remembered for some time to come. An excellent start to what has now become a permanent fixture in the Drama calendar.