History at Monmouth School for Boys is taught  in a robust and challenging way by enthusiasts. Academically rigorous, it is also a very popular subject. 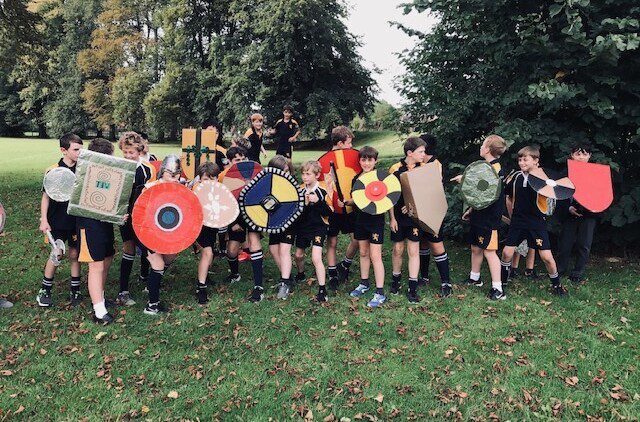 It has long been the most popular GCSE option and one of the most popular A level courses. Students are compelled to think and to argue for themselves. They are taught to problem-solve, to analyse, to write and think logically, as well as to understand better the roots of modern societies and institutions. Studying economic, technological, social, cultural and political change helps to prepare effective and open-minded citizens. Classes are encouraged to take an active interest in the links between history and all other branches of academic study, to delight in all intellectual discovery and to grasp that a historical appreciation of any place or community better equips them to live and work in it.

Pupils are introduced to the study of History in a brief course on the Roswell incident, focusing on the use and interpretation of a variety of historical sources.  The study of Medieval Britain begins with the Norman Conquest and its impact, before the course moves on to consider the medieval castle, the Church, the Crown and Parliament, as well as life in town and country.  Pupils also study the Black Death, the Peasants’ Revolt and England’s relations with Wales, Scotland, Ireland and France.  A special study is made of the Crusades and their impact on both Christian and Muslim cultures.

1.   At the end of the Lent term, pupils visit local castles and/or monasteries.
2.   In Michaelmas term, the Junior History Society recreates a battle in which many members of Years 7  to 9 participate.  In the Lent and Summer terms, the JHS also stages major events.
3.   If possible, the forms go to visit the Castle Museum, as well as having a tour of the key areas of interest in the town.

All taught in mixed ability forms.

Word processing and desktop publishing skills are reinforced by a class newspaper produced by each form on Thomas Beckett, whilst internet research and evidence skills are taught by an investigation comparing the Battle of Stirling as portrayed by the film ‘Braveheart’ with historical accounts which exist.  Boys are also encouraged to word process assignments where appropriate. CDs are also used in teaching, as well as videos.

Pupils study the development of the Tudor and Stuart states, including the Break with Rome, the Reformation and the Spanish Armada.  They then study the relationship between England and Scotland, the Civil War, Cromwell and the Commonwealth, and also the Glorious Revolution.  They finish with the topic of the British Empire with an examination of its historical record.

A field trip in the Summer term focus on the Civil War, visiting Worcester Commandery or Llancaiach Ffawr to experience the reality of life during the English (and Welsh) Civil War.  Sixth Formers are involved in helping to recreate personalities from the Civil War in Wales.

All taught in mixed ability forms

Word processing skills are reinforced by an essay task on the causes of the Civil War.

Graphs and spreadsheets are also incorporated where relevant.  Internet research and evidence skills are taught by an exercise on the freed slave, Oloudah Equiano.  Boys are also encouraged to word process assignments where appropriate, as well as using powerpoint to prepare class presentations. Active Board software and CDs are also used in teaching, as well as videos.

Pupils study the two World Wars in real depth.  They also consider their impact on the world as a whole and on Britain and Europe in particular.  The causes and consequences of the wars are studied, as are the various individual fronts on which they were fought.  The First World War is studied in the Michaelmas Term, with the Second World War and its era covered in Lent and Summer.

2.     25% of the end of year examination is a coursework essay on an aspect of the Second World War chosen by the pupil, written in the Summer term.

3.     10% of the end of year examination is a source-based study on the reputation of Field-Marshal Haig.

All taught in mixed ability sets.

Word processing and desktop publishing skills are reinforced by an assignment investigating the Battle of the Somme, which also involves considerable use of the internet and research skills.  Boys are also encouraged to word process assignments where appropriate and the end of year coursework essay on the Second World War is produced using word processing and desktop publishing packages.  Active Board software is also used in teaching.

The course content is examined through source-based questions, short notes and essays.

The course is based upon the Modern World 1918–1989. Particular emphasis is given to international relations both before and after World War II. The outline course on International Relations 1919 – 1975 investigates the failure of the Versailles Peace Treaties and the League of Nations, as well as considering the effects of the Russian Revolution, the Wall Street Crash and the Rise of the Dictators. Post-1945 the focus is on the relationship between the USA and the former USSR and the Cold War confrontations in Berlin, Hungary, Cuba and Vietnam. The course also includes detailed studies of the USA 1919 – 1941 contrasting the Jazz Age of the Roaring Twenties with the Great Depression years of the hungry thirties and the economic recovery under FDR’s New Deal. There is a coursework assignment on one aspect of American history. The course offers students the opportunity to discuss and analyse important issues and ideas whose effects are still felt today. The failures of communism and fascism, the triumph of liberal democracies and the birth of a consumer society are the key themes of this fascinating period. The Department also offers a four-day field study visit to the First World War Battlefields.

Candidates sit two papers at the end of the course and there is also a coursework component.

Source paper on one topic from the International Relations course. Seven source questions.  (33%)

Candidates must produce one assignment for which preparation has been done in class through the teaching of America 1919-1941 (27%). This work is undertaken in the Summer Term of Year 10.

If you enjoy the study of the past both for its own sake and also for the light it throws on the present, then History A level is for you. The study of History trains you to select relevant information, assess the validity of an argument, think and write logically, make informed judgements about controversial issues and present a well-ordered case backed by supporting evidence, thereby equipping you for a wide variety of careers.  It is certainly an ideal grounding for law, involving, as both do, the deployment of argument based on evidence.

The skill most developed by History is that of critical analysis and the ability to express ideas, knowledge and interpretations clearly and coherently. In the fields of management, marketing, journalism, administration, and accountancy this is a highly valued asset. Many employers regard A level History as an excellent training in the marshaling of arguments and in decision-making. As a well-respected academic discipline, History is considered a worthwhile A level subject for entry to almost all degree courses. It will furthermore provide those applying for predominantly scientific courses with academic breadth.

The department organises a large number of activities as well as maintaining close contact with university departments in History, Law and Politics. We have an excellent record in helping students achieve Oxbridge places as well as places at the whole gamut of higher education institutions. The student-run Agincourt Society meets about three times a term and, as part of that, university speakers and students alike give papers and debate. The department regularly goes to hear lectures at student conferences and, in addition, visits sites of historical interest; we have recently taken five-day field visits to Berlin and to St Petersburg.

The A level is a two year course consisting of one Breadth Study, a Depth Study and an Historical Investigation. A lot of students take A level History and we would plan to run at least three courses (each made up of a British and non-British paper) from the options below:

Component 3: Historical Investigation
A personal study based on any topic of the student’s choice.