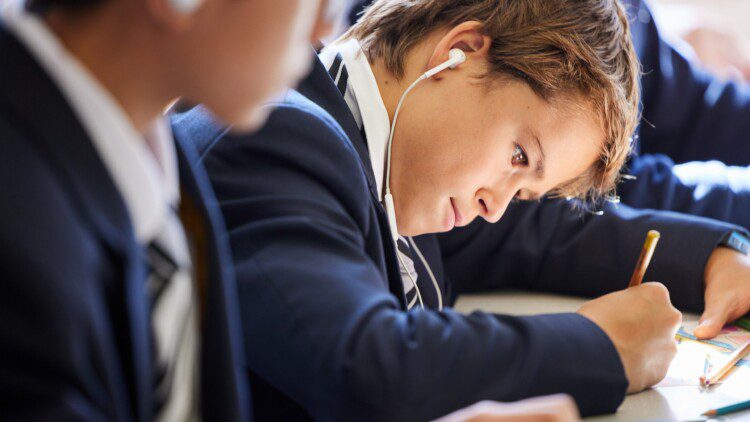 All boys study at least one Modern Foreign Language at GCSE. The department has a computer suite where all students have a weekly lesson. As well as eight teachers, the department also has three foreign language assistants from France, Spain and Germany. French is studied in the first three years and Spanish and German become available as options in Year 9.  There is also the opportunity to join an accelerated starter set in Spanish in Year 10. French, Spanish, German and Russian are available as Sixth Form subjects.

There is a flourishing study visit programme to France, Spain and Germany, as well as cinema and theatre trips and other events. A trip to Russia also takes place every two years.

The Department invites Year 9 – 13 pupils and their parents to a yearly Languages and Career event, where eminent speakers share their experience of foreign languages in their careers and organisations.  This expert advice from professionals in very diverse fields of activity helps the boys to understand where their languages could take them.

Teaching groups are small and MFL classrooms are equipped with interactive and audio-visual technology.

The language content is of a practical nature which will enable pupils to begin to cope with everyday situations in France, Spain and Germany. The programme of study introduces and consolidates the following topics – Family, Home, Local Region, Sports and Leisure, School, Holidays, Food and Shopping.

The department possesses an impressive film collection for students to borrow from.

Unless there are special circumstances, all pupils study at least one Modern Foreign Language to GCSE level. The languages available are French, Spanish and German.

Those who did not study Spanish in Year 9 have the opportunity to begin the language in Year 10. Those who wish to study French or German must have studied the language previously.

Those who choose to continue with French will be divided into small mixed-ability groups. Spanish and German will also be taught in mixed-ability groups. For all languages boys are allocated to groups on the basis of their option choices. Students have additional speaking practice with the Language Assistants on a weekly basis.

In the Sixth Form, the groups are kept very small and taught in mixed groups of boys and girls. Across the four languages, about thirty students study a language or more in Year 12, and about twenty in Year 13.  The support offered in Year 13 with one-to-one weekly sessions with the FLA and additional lessons, means that the results at A level are consistently good.

You will work from textbooks, newspapers, magazines, TV and radio broadcasts, various websites, DVDs and literary texts and extracts, studying both language and culture.

Study visits or work experience abroad are organised in France, Spain, Germany and Russia, and these are often arranged in conjunction with Monmouth School for Girls:

There are also trips to the cinema, to the theatre, to lectures and study.

Beyond Monmouth School for Boys

A growing proportion of boys take a language at university, particularly combined with another subject (for example, Law and Politics).

One of our most notable alumni is Eddie Butler.  Former rugby international, now historian and commentator for the BBC, he read French and Spanish in Cambridge.