Students at Haberdashers’ Monmouth Schools celebrate their A level success.

Students at Haberdashers’ Monmouth Schools are celebrating their A level results, and a bumper crop of top grades.

The students in the co-educational Monmouth Schools Sixth Form performed very strongly in the first year of traditional A level examinations since 2019.

To illustrate the success of the Monmouth cohort further, more than three quarters (77.4%) of all grades were A*, A or B.

Four students fulfilled their offers to study at the University of Oxford.

Zeb, a Deputy Head Boy at Monmouth School for Boys, will be reading Physics at Lincoln College, Oxford, after achieving an outstanding four A*s.

Elinor achieved three A*s and a B and will be studying Japanese at Hertford College, Oxford.

Freya, Head Girl at Monmouth School for Girls, will be going to St John’s College, Oxford, to read History of Art after recording two A*s and an A. Freya has been a pupil at Haberdashers’ Monmouth Schools since nursery.

And talented musician Eden, a former pupil at Osbaston School, achieved two A*s and an A and will be reading German and Russian at Somerville College, Oxford.

There were many other outstanding individual performances.

Emma achieved a remarkable five A*s and will be heading to Durham University to read Physics.

In addition to Zeb, five other students recorded four A*s. Benjamin will now study Medicine at the University of Exeter; Claire, who also achieved an A in EPQ, will read Medical Sciences at Exeter. Jonathan will also be heading to Exeter to study Natural Sciences; Carys will read Mathematics at the University of St Andrews, while Harry is to study Finance at the London School of Economics.

Lillian, who achieved three A*s, two As and an A in EPQ, was a top performing student and secured her place to read Economics at University College London.

Jodie recorded an impressive three A*s and two As to study Biochemistry at the University of Bristol.

Isobella achieved two A*s and an A and will be reading Medicine at Imperial College London.

“I am really looking forward to studying at Imperial – it’s a fantastic course and I might eventually go into paediatrics or surgery,” said Isobella. “I can’t wait to get started.”

Teddy will be heading to the University of Virginia, USA, after recording three A*s and an A.

Examination boards had been instructed to achieve grade outcomes which were roughly halfway between the grading in 2019 and the higher grades achieved under the teacher-assessed system in 2021.

This year’s A level results at Haberdashers’ Monmouth Schools are much closer to the 2021 grades than the 2019 grades, highlighting that the students performed strongly against the UK cohort.

They said: “We could not be more proud of the achievements of our outgoing Year 13 students.

“They are our first-ever year group to take their A levels without having sat their GCSEs.

“They also had to contend with all the disruption of the Covid-19 pandemic throughout the last two years.”

Mr Dorman and Mrs Miles added: “In spite of the challenges they faced, our students have shown great determination and passion for their subjects and made the best possible use of all the support given to them by our brilliant teaching staff.

“Our boys and girls work extremely hard at Monmouth in their academic studies and achieve impressive results alongside being so heavily involved in many activities at our schools.

“Our Year 13 leavers are an outstanding group of young men and women. They can look forward to taking their next steps with great confidence and will make a positive impact in society.”

Students at Haberdashers’ Monmouth Schools are celebrating their GCSE results

At Monmouth School for Boys, 22.87% of all grades awarded were the top grade, 9.

These are stronger results than in 2019, the last year in which GCSEs exams were taken before the Covid-19 pandemic.

Academic scholar, Oliver, secured an A*, eight grade 9s and two grade 7s and will study History, Chemistry and Latin at A level.

William also an academic scholar, achieved eight grade 9s/A*s, an 8 and a 7. He intends to take Chemistry, Maths and Biology at A level.

Alexander, also an academic scholar, recorded an A*, six 9s and three 8s and will study Maths, Further Maths, Physics and Chemistry at A level.

Miles, an academic and music scholar, was awarded eight grade 9s, two 8s and a 7 and will study Maths, Further Maths, Computing and Physics.

“I am very pleased with my results and, although I did work hard for my exams, I was nervous in the lead-up to receiving them,” said Miles.

Logan achieved an A*, six 9s and three 8s and will study History, Latin and Religious Studies.

Anderson was awarded an A*, seven 9s and to 7s and will study Chemistry, History and Biology.

Thomas, who achieved a clean sweep of grades 7-9, or A*/A , cut his holiday in Germany short to return to school to pick up his exam results.

“I have been on holiday near Hannover, but I wanted to come into school to physically collect my exam results,” he said.

“I didn’t know my results until I got to school but I am very pleased with them, and it was definitely worth cutting my holiday short for.”

A keen musician and member of the Model United Nations club, Thomas will be studying German, Latin and History at A level.

Other boys who achieved a clean sweep of grades 7-9, or A*/A were Alfie, William, Kieran, Dylan, Samuel, Harry, Jack, Benjamin, Will, Sulaiman, Max, Ridwan and Ethan, who only arrived in Monmouth from Hong Kong last September.

Headmaster at Monmouth School for Boys, Mr Simon Dorman, said: “I am delighted with the results of our Year 11 boys, which are the culmination of years of hard work by the boys and the brilliant support of our dedicated teaching staff.

“The boys have had to contend with Covid-relation disruption to their learning, including two terms of online lessons, and adapted incredibly well to these challenges.

“They are a talented and resilient group of young men, who are now well equipped to tackle their Sixth Form courses. We are very proud of them and look forward to seeing them thrive in our co-educational Sixth Form.”

The Year 11 students overcame Covid-related disruption to their learning, including online lessons, and adapted impressively.

More than half of all grades awarded were at 7/A or above.

Tabitha achieved 10 9s and one A and is now planning to study Biology, Chemistry and Maths A level.

Ada recorded 10 9s and a Distinction in Further Maths and will be studying Chemistry, Geography and Maths at A level.

Daniela achieved a full set of results at 7/A or above. Daniela is now planning to take A levels in Physics, Maths and English as she works towards a future career in engineering.

Other girls who recorded a full set of results at 7/A or above were Mirin, Georgia, Isabel, Keanie, Alexandra, Anna, Nell, Laura, Elspeth and Annie.

Eleanor achieved two 9s, three 8s an A and three 7s among her results and is hoping to study Maths, Further Maths, Physics and Computer Science at A level.

“I am very excited about going into the Sixth Form,” said Eleanor, a talented musician.

“I would like a career based on Computer Science with Cyber Security and I can’t wait to get started on my A levels.”

Headmistress at Monmouth School for Girls, Mrs Jessica Miles, said: “I am extremely proud of what our Year 11 students have achieved.

“The normal rhythm of their school life was taken away from them when they were approaching their final term in Year 9, and they had to hit the ground running in Year 11.

“They have faced up to the disruptions and challenges along the way, supported by our excellent academic and pastoral staff.

“Alongside their academic achievements, our Year 11 students contributed brilliantly to the wider life of the school, whether it be through music, sport, or fund-raising for a myriad of causes.

“Our students now turn their thoughts to the start of their A level courses and I am very much looking forward to seeing them flourish in our Sixth Form from September. 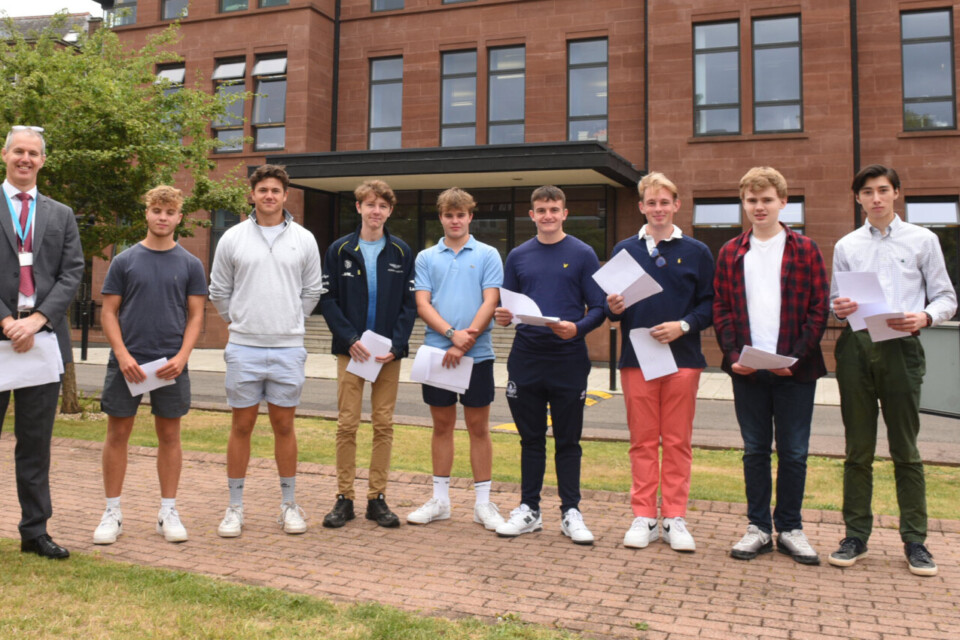 Students at Monmouth School for Boys celebrate their A level results with Headmaster, Mr Simon Dorman. 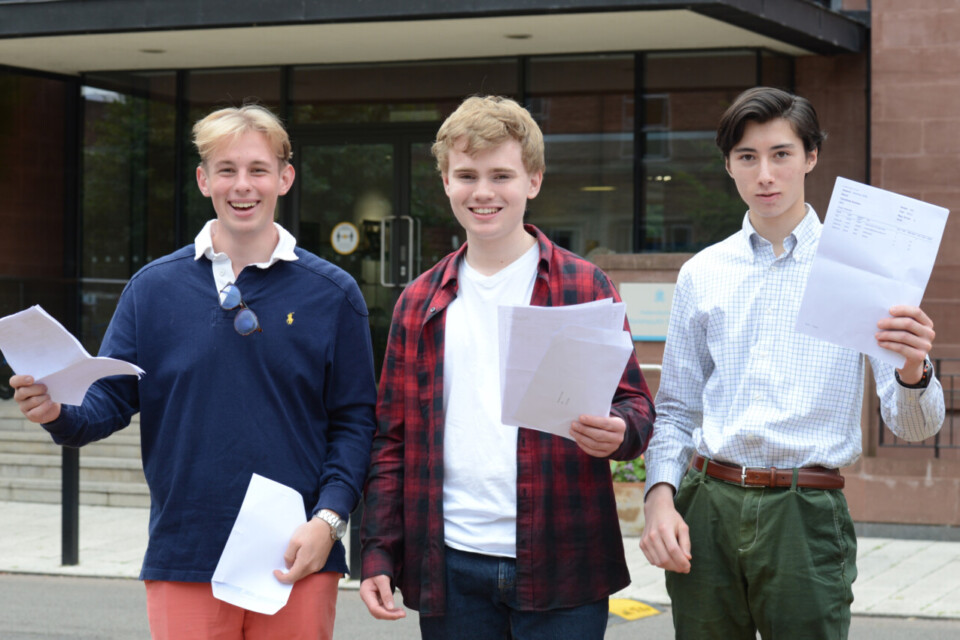 Oliver, Joe and Roy celebrate their A level results at Monmouth School for Boys 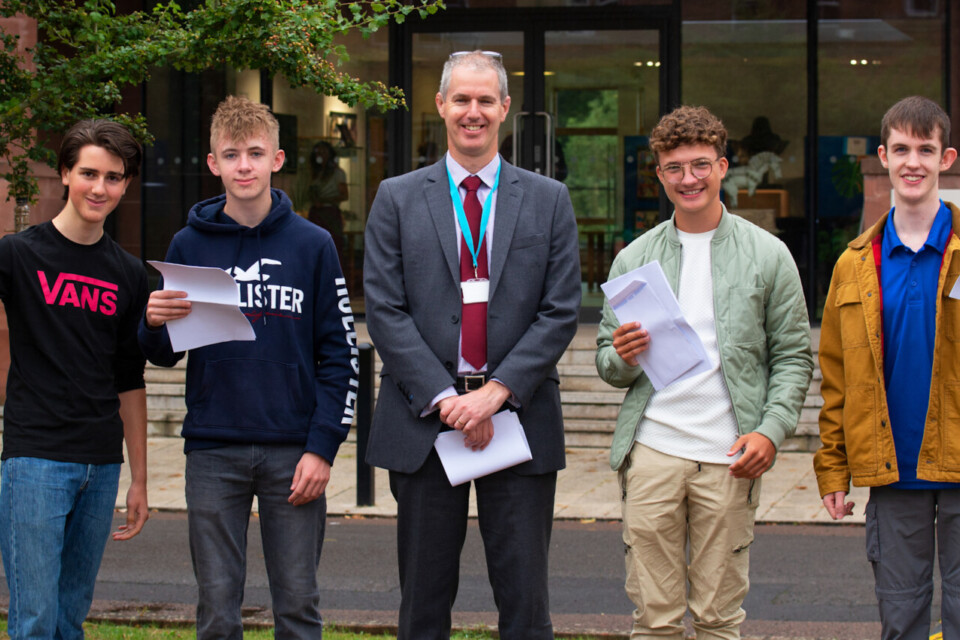 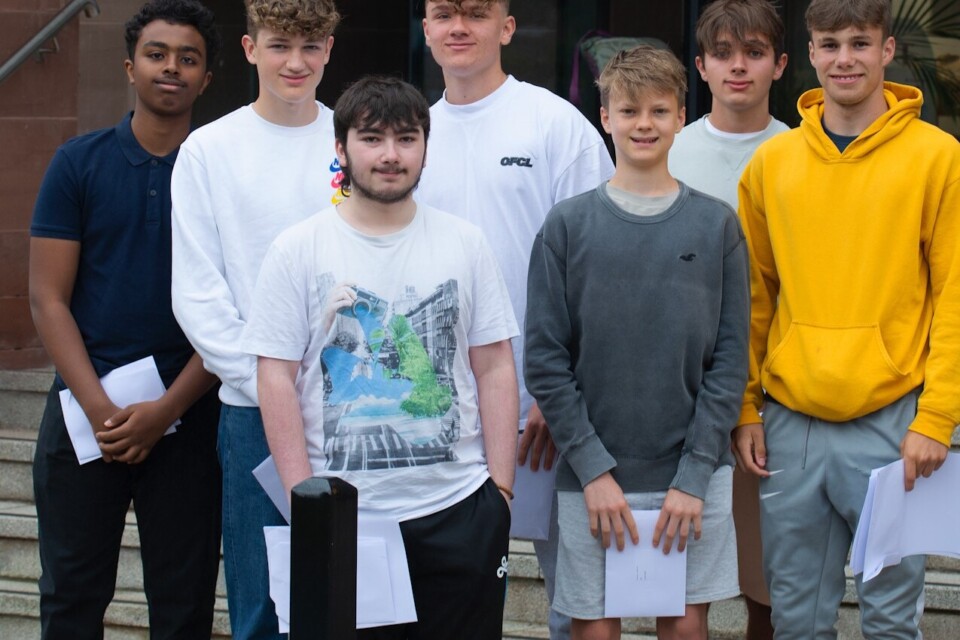 Students at Monmouth School for Boys celebrate their GCSE results.