Students at Haberdashers’ Monmouth Schools are celebrating their A level results today after a remarkable chapter in their lives.

The students in Monmouth Schools Sixth Form showed tremendous resilience as they overcame disruption and uncertainty caused by the pandemic during the past 18 months. 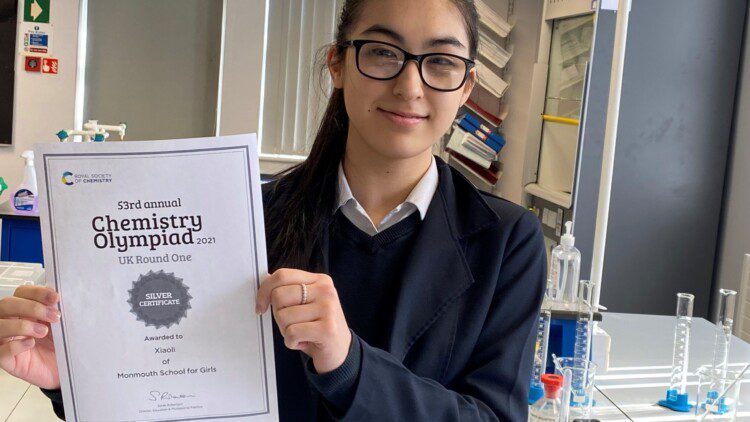 Xiaoli, aged 16, will be reading Engineering at Queens’ College, University of Cambridge, after achieving four A* and an A* in Extended Project Qualification (EPQ)

The Monmouth students achieved outstanding individual results after adapting to learn in different ways – both at home and at school.

Xiaoli, aged 16, will be reading Engineering at Queens’ College, University of Cambridge, after achieving four A* and an A* in Extended Project Qualification (EPQ) to add to A* in both Maths and Further Maths. She also has 15 GCSEs under her belt and Grade 8 in Music Theory, flute and piano. Inspired to pursue a degree in Engineering after an alumna, Priyanka Aswani, returned to school to give a talk, Xiaoli would like to be an aerospace engineer.

Head Girl at Monmouth School for Girls, Anna, gained two A* and two As and will be reading German and Linguistics at The Queen’s College, Oxford. She is also taking up a choral music scholarship. A member of the National Youth Orchestra of Wales, Anna is also in the Rodolfus Choir (run by Ralph Allwood). Anna won the Oxford-German Olympiad in 2020 and led the cello section in Haberdashers’ Monmouth Schools Symphony Orchestra and Senior Strings.

Robin, who achieved two A* and an A to add to his A* in both Maths and Further Maths, fulfilled his offer for a place at the University of Cambridge. However, Robin has decided to read a degree in Computer Science with Cyber Security at the University of Southampton, a course which he believes is better suited to his future career path.

Ellie Cole, who was awarded two A*s and two As in her A levels last summer, has accepted an offer to read German and Hebrew at St Hugh’s College, University of Oxford.

Ellie applied to Oxford whilst in Germany, sitting her admissions tests in Munich and doing the interviews from the school. She attended Haberdashers’ Monmouth Schools from Nursery to Sixth Form and, as part of her degree at Oxford, will spend a year abroad at the Hebrew University in Jerusalem.

Headmistress at Monmouth School for Girls, Mrs Jessica Miles, said: “This year’s A level students have had to cope with uncertainty and disruption, they have been asked to adapt, to learn in different ways and in different locations and using different tools. They have been supported along the way by their teachers who have worked incredibly hard to develop lesson plans and assessments that have been used both in the classroom and remotely.  I am immensely proud of them and extremely grateful for all their commitment.”

Headmaster at Monmouth School for Boys, Mr Simon Dorman, said: “Our Year 13 cohort has performed magnificently in their A level assessments, in spite of facing severe disruption to their studies throughout their Sixth Form courses. We could not be prouder of them and they should be congratulated on their excellent grades. A total of 43 students out of 132 achieved three or more A*/A grades, which is 32.6% of the cohort.”

Mr Dorman added: “Our students have been supported magnificently by our brilliant teaching staff, who have worked tirelessly. The students will now go on to university armed with enviable grades and new skills learned during the pandemic, which will stand them in good stead for the transition to higher education. This is an exciting time for them as they confirm their university places and prepare for the next stage of their education.”

Principal, Mr James Murphy-O’Connor, said: “I am delighted that the hard work and dedication of our students are recognised in the results. Last year, schools had widespread confusion with the algorithm, and this year’s results are fairer and more accurate, and students and parents understand how they have been reached. We were required to submit a policy on how we would determine grades – which were reviewed by exam boards and amendments were made. Significant checks and balances were introduced to ensure fairness in this year’s grade awarding.”

Students at Haberdashers’ Monmouth Schools are celebrating their GCSE results today after showing tremendous maturity and commitment throughout the past 18 months.

The Year 11 pupils have overcome uncertainty and disruption, caused by the pandemic, and adapted well to the schools’ online learning provision, particularly after the Christmas holidays.

A total of 17 girls achieved an impressive set of all 9s and 8s, while five girls recorded an outstanding haul of 10 subjects at grade 9.

Sophia, an academic scholar, would like to study Medicine at the University of Oxford and she took her first step towards it with 12 9 grades. She will be taking A levels in Chemistry, Biology and Maths.

Jade, another leading performer, achieved 10 9s and an 8.

Headmistress at Monmouth School for Girls, Mrs Jessica Miles, said: “To see three quarters of all grades at 9-7 is testament to the hard work and resilience that our girls have shown during an unprecedented and turbulent time.

“To achieve so much when they have endured such testing times over the last 18 months is truly well deserved.

“They are a brilliant bunch of young women who have supported each other and shown real guts throughout.  I couldn’t be more proud of them.

“As always, they have been supported by outstanding teachers, and committed and caring pastoral staff, who have worked tirelessly to ensure that our girls achieve their very best and my thanks go to them.   I hope that all our girls will now be able to look forward to the next stage of their education with confidence and excitement.”

Sam and Thomas each gained 10 9 grades. Thomas, an academic scholar, will now be taking Physics, Chemistry and Further Maths at A level.

Rhys, who achieved nine 9s and an A*, is planning to study Physics, Chemistry and Further Maths at A level.

Ollie, an academic scholar, also secured nine 9s and an A*, and will be studying Geography, Biology and Religious Studies at A level.

Sixth Form Foundation Year student, Felix, arrived in the UK for the first time in September and returns to Hong Kong with a clean sweep of five 9 grades.

Headmaster at Monmouth School for Boys, Mr Simon Dorman, said: “Three quarters of our boys’ examination entries received one of the top three grades 9-7, or A*/A under the previous grading system, and 31% received the top grade, 9.

“During their two-year GCSE courses, our boys have seen considerable disruption due to the effects of Covid-19 and have had to make many adjustments to how they studied.

“They have shown incredible resilience and determination and it is all the more reason for them to be very proud of what they have achieved.

“Their teachers have worked extremely hard to make sure that the boys have had the very best of classroom teaching and online support for the periods of home learning.

“I am so pleased to see our boys getting the excellent results that they deserve. They are a hard-working group, who give so much to the school community in and out of the classroom, and have been consistently impressive in how they have dealt with the restrictions imposed by the pandemic.”

Mr Murphy-O’Connor added: “Today’s GCSE results are a great credit to them and their hard work as well as to the teaching staff who have supported, guided and inspired them.

“Our students now turn their thoughts to the start of their A level courses in September and can approach their Sixth Form studies with great confidence.”