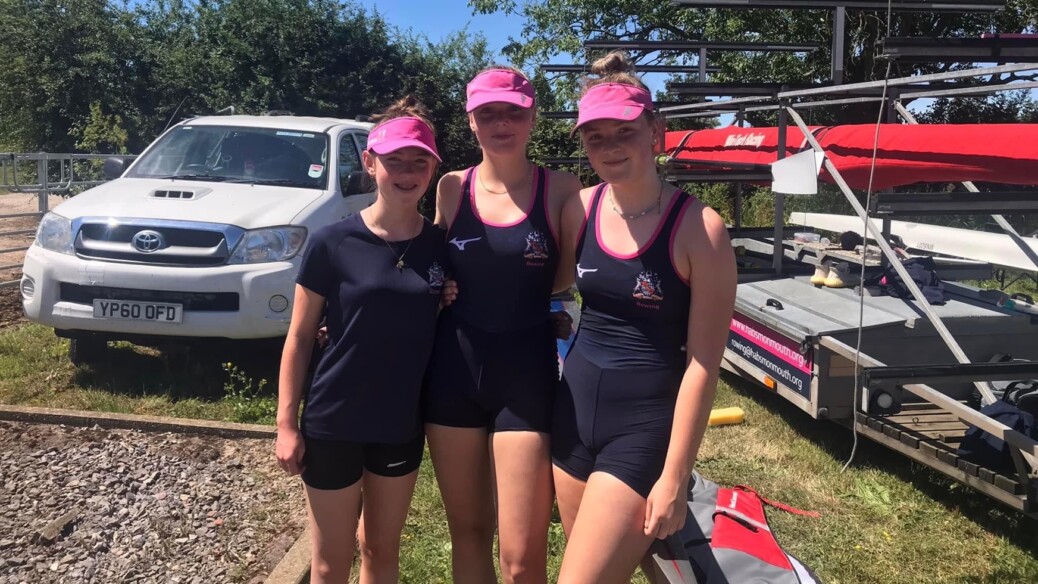 Eleanor, Elina and Hattie at the Welsh trials earlier this month

Two rowers at Monmouth School for Girls will be representing Wales at the prestigious Home International Regatta in London on Saturday (23rd July).
Eleanor and Elina, who are both in Year 12, will be locking horns with England, Scotland and Ireland at the London Regatta Centre.
At the Welsh trials earlier this month, the girls shone in the coxless pairs to earn a top spot in the junior women’s sweep section.
They are both looking forward to gaining their Welsh vests and preparing for their debut at a training camp in Cardiff.
The Home International Regatta is an historic annual competition dating back to 1962 and sees the four Home Nations of England, Scotland, Wales and Ireland battling it out.
It is being held this weekend for the first time in three years.
Boatman, Mr Robin Fletcher, said: “Monmouth School for Girls Rowing Club is enormously proud of Eleanor and Elina’s achievements and hard work this season.
“We are also immensely proud of Hattie who, unfortunately, didn’t quite make selection for the Welsh squad.
“Hattie has been coxing our senior crews and has experienced the national schools, Henley Women’s and Henley Royal Regatta competitions as a cox for the first time this year.
“Welsh Rowing is closely watching her progression as she develops.”
He added: “Hattie has demonstrated perfectly what it takes to pursue junior elite sport while concentrating fully on academic studies, during her GCSE year.”
The photographs shows Eleanor, Elina and Hattie at the Welsh trials earlier this month.