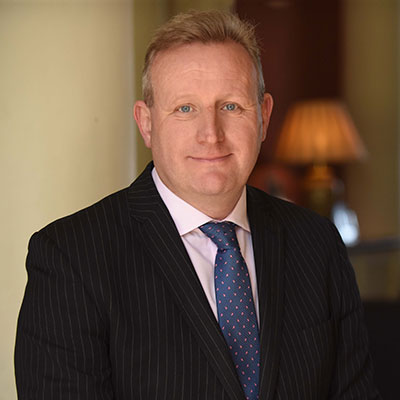 The governors of the Haberdashers’ Monmouth Schools are delighted to announce the appointment of Mr James Murphy-O’Connor as their first overarching Principal. James was appointed from an impressive field of applicants and will take up this new post in September 2019.

A history graduate from Oxford, with a PGCE from Cambridge, James started his teaching career at Stamford School in Lincolnshire, moving on to become a history master and housemaster at Sherborne School in Dorset. James then became the founding Headmaster at Sherfield School in Hampshire, a challenge he relished, building pupil numbers to 500 in just five years. In 2009, James took on the headship of Prior Park College in Bath and subsequently became Principal of Prior Park Schools with responsibility for their prep school, junior school, college, and the senior school he established in Gibraltar in 2016. James is interested in literature, art and coastal walking. He is also a passionate supporter of the Ireland Rugby team as his father and uncle both played for the side during the 1950s. James and his wife, Ali, have four children ranging in age from 14-24.

Mr Audley Twiston-Davies, Chairman of Governors said,
‘We see this appointment as a really positive step for the Haberdashers’ Monmouth Schools as we aim to build on our many strengths and successes. As Principal, James’ role will be mainly strategic with an emphasis on academic and co-curricular provision, marketing, fund-raising, outreach and community relations working with the five schools’ Heads to provide the best possible provision for our pupils.’

Mr Murphy-O’Connor said,
‘I am delighted to be appointed as the schools’ first Principal. This position has been created to support the schools as they meet the challenges of the next decade in a confident and imaginative way. The schools have a long-standing reputation for forming young men and women of ambition and quality who go on to make outstanding contributions to their communities and to society at large. The schools’ mission and values of shaping students into people of integrity, humility, ambition and service will remain at the core of my contribution over the years ahead.’