A top children’s writer encouraged boys to let their imaginations run wild and pen poetry based on unique talismans during an inspirational masterclass.

Poet and author Jean Atkin spent all of Tuesday running workshops at The Grange, Monmouth Preparatory School, after one pupil, Jake, won a nationwide Poetry Society competition to celebrate the Battle of Agincourt’s 600th anniversary.

Jake’s piece, written from the perspective of an abandoned battlefield artefact, was the overall winner but two of his schoolmates’ poems also made it into the top five entries from across the UK.

Their prize was to spend the day learning from award-winning poet Jean, who mentors emerging writers, performs readings at festivals and works regularly with children in schools. Jean is also the author of children’s novel, ‘The Crow House’.

She said: “The boys were a joy to work with, I had a great day. They all have lively minds and lots of enthusiasm.

“I think the ability for self-expression is immensely important to create rounded human beings. It’s for artistic, aesthetic reasons and good mental health that we need to express ourselves.

“Poetry is about pleasure, it’s about fun. And what’s life if you don’t have some fun?

“As you write a poem you are working exactly and precisely. Working on poetry with young children helps make them skilled at ensuring each word is chosen carefully. They will start to be pickier about the language they use.

“It’s freedom with a crafted understanding of how you’re going to put the words together. Decisions about tense, line length, where it takes you at the end – it’s a kind of paradox.”

The boys especially loved having the freedom to let their imaginations run wild throughout the day. 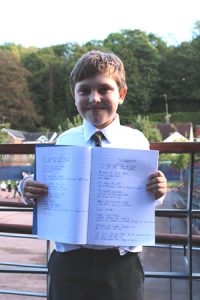 Bill, nine, said: “Jean went round with a biscuit tin full of talismans which included an ammonite fossil, fragments of old pottery and shells.

“I picked the ammonite fossil because I’m really interested in prehistoric things.

“We had to write a poem about our talismans in about 15 minutes.

“I wrote about its past. It was like being transported back in time to the Cretaceous period underwater. I liked having the freedom to write whatever you wanted about this talisman. It was like looking at fragments of other people’s lives. It was a lot of fun and I liked taking a risk.

“My ammonite could have been around five million years ago, or even longer. The reason I’m so interested in history is because you see something, like an old ring, and you can imagine which Tudor wore it, or you see a tooth and imagine it was once in the mouth of a T rex.

“I like poetry because it can be interpreted differently by everyone. You might think a poem is about animals in a jungle and I might think the same one is about a person or a nobleman.” 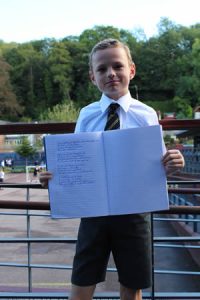 He said: “Thoughts came to mind like ‘could it be a good luck charm or a jewel in someone’s crown?

“I wrote my poem as a mix of the past and the present. I tried to think like Bill. This charm was a Celtic lord’s. He had trained it and made it tell prophecies and got a lot of money out of it. The lord was murdered but the jewel escaped and travelled all over.”

“It was amazing,” said Bill.

Harry added: “I liked the last bit of the workshop when everyone read out their poems.

“It was a great experience to have an actual poet to help us.”