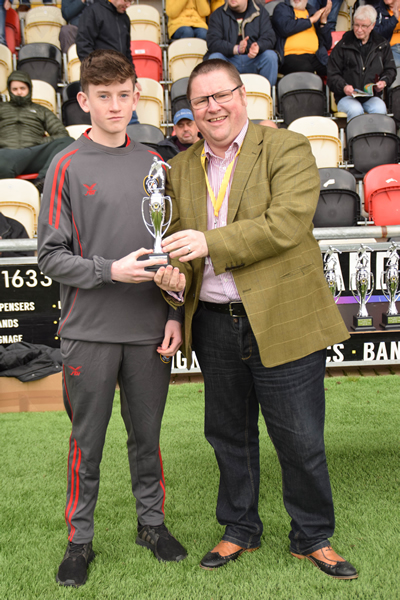 A talented Monmouth footballer has been recognised for his outstanding season with League Two club, Newport County.

Midfielder Alex was crowned as the Under-15s Player of the Year with Newport County Development Centre.

Alex also enjoyed an excellent campaign with Monmouth School for Boys’ Under-15 A team who went throughout the season undefeated.

A Newport County spokesman said: “Alex has developed and progressed into a very confident player, who is very skilful and has a fantastic attitude towards football.”

Alex was among three players from Monmouth School for Boys who represented Newport County during the season.

Seb was selected for Newport County Under 15s Academy, with Sam and Alex chosen for the Exiles’ under 15s development squad.

The trio had been spotted by County while playing football at the school and shone during last summer’s trials.

All three teenagers have been a key part of the school’s Under-15 A team who have climbed to third for their age section on SchoolsSports.com, a national football performance league for independent schools in the UK.

Master in Charge of Football at Monmouth School for Boys, Mr Mark Tamplin, said: “I am extremely proud of Alex for his commitment and dedication to Newport County’s development team.

“Alex has also enjoyed a very impressive season for the school team, who are ranked third in the UK for their age group.

“Alex has a tremendous passion for playing football and we are delighted his efforts have been recognised by the coaches at Newport County.”