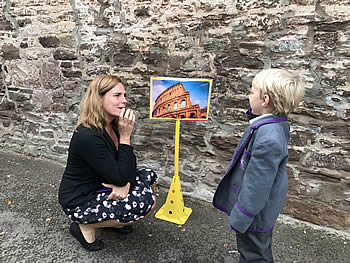 Children and parents had a cosmopolitan feeling when they arrived at Monmouth Schools Pre-Prep and Nursery for the first morning of the new term.

There were many happy and smiling youngsters who were greeted just inside the main entrance at Agincourt by Headteacher Jennie Phillips.

Some of the children enjoyed having their photographs taken inside a London Duck Tours boat which had been made out of cardboard.

Pictures of famous landmarks from around the world also lined the route as children walked to their classrooms ahead of the first school assembly.

The Statue of Liberty in New York, Eiffel Tower in Paris, Golden Gate Bridge in the USA, the Colosseum in Rome and the Wales Millennium Centre in Cardiff were just some of the notable images on display.

The outside of the school’s brown shed was also transformed into the famous Manhattan skyline. 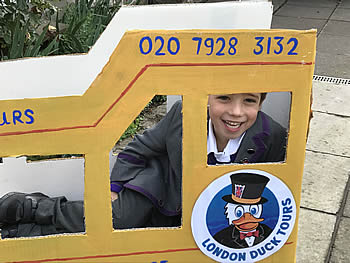 Bright lights and big cities is the theme for the new term and, among other things, the children will be learning about the population differences, explained Mrs Phillips.

With virtual tours planned and trips being arranged to nearby cities of Cardiff and Bristol, the children should have plenty of fun as they thrive in an exciting and vibrant environment.