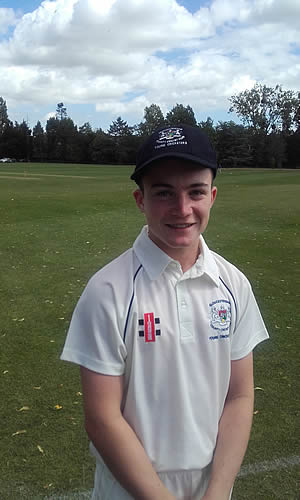 Talented cricketer Sam has put opposition batsmen in a spin this week at the prestigious Taunton Festival.

The Monmouth School pupil has been representing Gloucestershire Under 14 boys in a tournament which also involved Buckinghamshire, Derbyshire, Devon, Middlesex and Shropshire.

Thousands of young cricketers have played at the festival over the past three decades, including several England players and many others who have enjoyed careers in the first-class arena.

Sam, who is a leg spin bowler, helped Gloucestershire to three wins from five matches, which included one defeat and an abandonment caused by the wet weather.

He took 11 wickets at the festival – four against both Shropshire and Devon and three against Buckinghamshire.

The 13-year-old has now played in nine competitive matches for Gloucestershire this summer, snapping up 25 wickets in the process.

Last month, Sam shone on his debut for the county and finished with 5-11 as he guided them to a six-wicket win at Wiltshire in the England and Wales Cricket Board’s Under-14 Cup.

Sam made a perfect start to this week’s festival, claiming 4-35 from 10 overs against Shropshire as Gloucestershire posted 224-9 before bowling out their rivals for 190.

After Gloucestershire slipped to a five-wicket defeat to Middlesex, Sam stepped up to the mark against Devon in their third fixture.

He bagged 4-28 in 7.2 overs to skittle out the opposition for just 62 as Gloucestershire recorded a 73-run success in a low scoring encounter.

Sam then picked up 3-33 from 10 overs to bowl out Buckinghamshire for 169 in a three-wicket victory for his county side.

Sam, who has just finished in Year 9 and lives in the town, has already represented Monmouth School at first team level and took part in the Castle Festival in Essex.

He is also a regular member of Monmouth Cricket Club’s first team where he plays alongside his father Paul in the South-East Wales League Division Three.

Sam, who bats left handed, is the third highest scorer for the town club this summer with 425 runs in all competitions at an average of 28.33, including two half-centuries.

The teenager has also been in fine form with the ball, collecting 18 wickets for the club at 20.83, including a best haul of 4-25.