QUEEN’S BATON RELAY IS HEADING TO MONMOUTH SCHOOL FOR BOYS 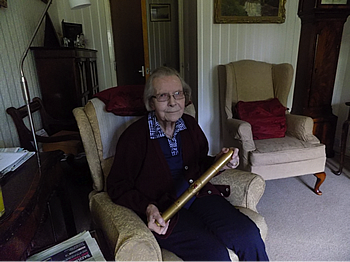 History will come full circle when the Queen’s Baton Relay arrives at Monmouth School for Boys tomorrow at noon.

The Baton for the Gold Coast Commonweath Games 2018 will come face to face with the very first Queen’s Baton which started life in Wales as the prelude to the British Empire and Commonwealth Games in Cardiff in 1958, and continues to be a symbol of peace and harmony through participation in sport.

The original Baton belongs to Mrs Hackett Pain, the daughter of Sir Godfrey Llewellyn, who was chairman of the organising committee for the 1958 Games.

In addition to the original Baton, Mrs Hackett Pain also has copies of the Queen’s message inside it, along with medals from the Games.

She said: “It’s wonderful that history has come full circle and the Queen’s Baton for the 2018 Games returns to Wales where it all started almost 60 years ago. This is a proud moment for my family, and for Wales.”

Former Monmouth School pupil Lewis Oliva, who is a member of the British cycling squad, will be among the baton bearers at the special event in the town.

Dr Andrew Daniel, Headmaster of Monmouth School for Boys, said: “I am tremendously proud that Haberdashers’ Monmouth Schools have been chosen as a hosting point on the Queen’s Baton Relay.

“Many of our past pupils have competed at Olympic and Commonwealth level in a variety of sports such as cycling, fencing, rowing, swimming and equestrian.

“The Queen’s Baton Relay is a fantastic opportunity for us to put Monmouth firmly on the sporting map and inspire the next generation of stars ahead of the next Commonwealth Games.”

The Monmouth event is being organised by Commonwealth Games Wales and will be attended by primary and secondary school children from the town.

It is open to the community, but there will be no public parking available at Monmouth School for Boys’ Sports Ground.

After leaving Monmouth at 1:00pm, the baton will then travel to the Royal Mint in Llantrisant before ending the day in Pontypridd.

Dr Daniel added: “The school has always recognised the importance of sport and continues to make a significant contribution in delivering sporting excellence across the generations.”

Commonwealth Games Wales Chairman, Helen Phillips said: “The arrival of the Queen’s Baton in Wales brings the excitement and anticipation for the Gold Coast Commonwealth Games to our communities, giving the people of Wales the chance to engage with this global symbol, and start focusing on the fortunes of Team Wales next year.”

The Queen’s Baton Relay started at Buckingham Palace on 13th March this year, and will be travelling through Wales between 5th and 8th September.

The Baton will then work its way to Australia via Asia and Oceania in time for the 2018 Gold Coast Commonwealth Games’ opening ceremony on 4th April.