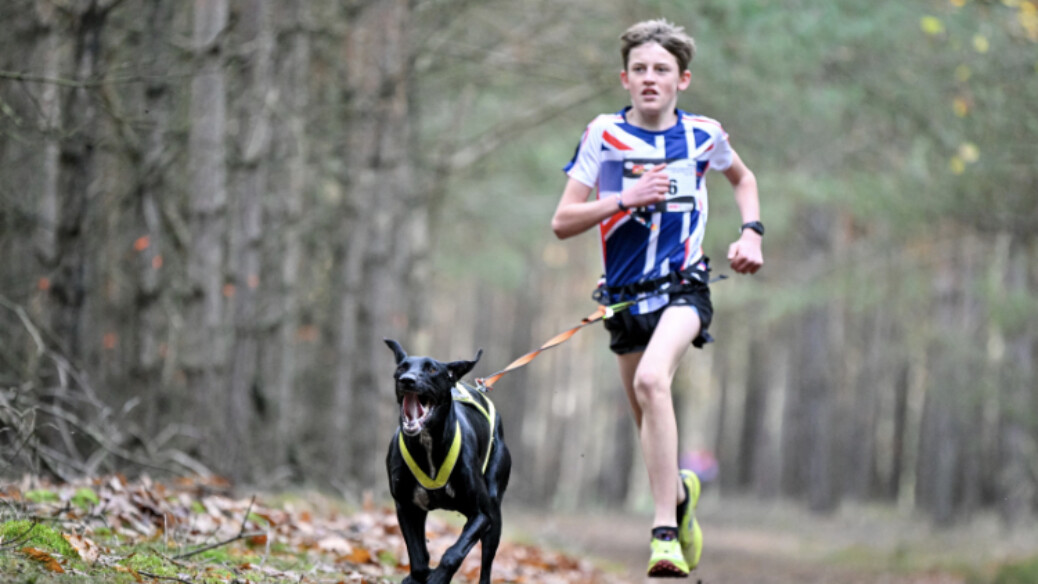 A 14-year-old Monmouth schoolboy has stormed to an historic European title for Great Britain in the sport of canicross.
Matt, a Year 9 pupil at Monmouth School for Boys, clinched the Junior male title at the IFSS (International Federation of Sled Sports) European Championships in Leipa, Germany.
In the two-day event, Matt and his dog, Top Dogz Nigra, clawed back a 10-second deficit as the teenager became the youngest-ever winner of the junior male crown.
Matt had qualified to run for Great Britain at the major European competition after triumphing, earlier this year, at the British National Canicross Championships organised by the BSSF (British Sleddog Sports Federation).
Canicross is a sport of running off-road with your dog, in which an athlete wears a waistbelt that attaches via a line to a padded dog harness. The sport is growing quickly in the UK.
In Germany, Matt set off seventh in his first race, overtaking four athletes and finishing second in a time of 11m:17s. This was by far the quickest Matt has ever raced, averaging 2m:45s per km.
He began the second day, second out of 14 starters, 10 seconds adrift of a fellow British athlete and only three seconds ahead of an experienced French competitor.
Due to unseasonably high temperatures, the course was shortened to 3.6km and Matt and his dog went flat out from the beginning – and it paid dividends.
Near the finishing line, Matt asked Nigra for one big push and, driven on by supporters, they stepped up the pace and eventually sealed a remarkable success by a five-second margin.
“We have no idea how Matt managed to come from such a deficit to win the title,” said his proud mum, Sarah Smith.
“It was an unbelievable race and there’s a lot to be said for inner belief.
“Matt’s biggest fear was travelling to Germany and then being beaten by a fellow British athlete.”
She added: “If you truly believe in yourself, then you can achieve anything. This was an amazing and extraordinary experience for Matt and all of us. There’s still so much to learn about this crazy sport.”
Another leading performer was Old Monmothian, Rowan Saxton, who also shone in Germany and finished a respectable 15th, in a very competitive field, in the Elite Men’s category.
Meanwhile, Matt is now looking forward to the first leg of the British Championships on Thetford Forest next month in a bid to retain his British title and to qualify for the World Championships next year.