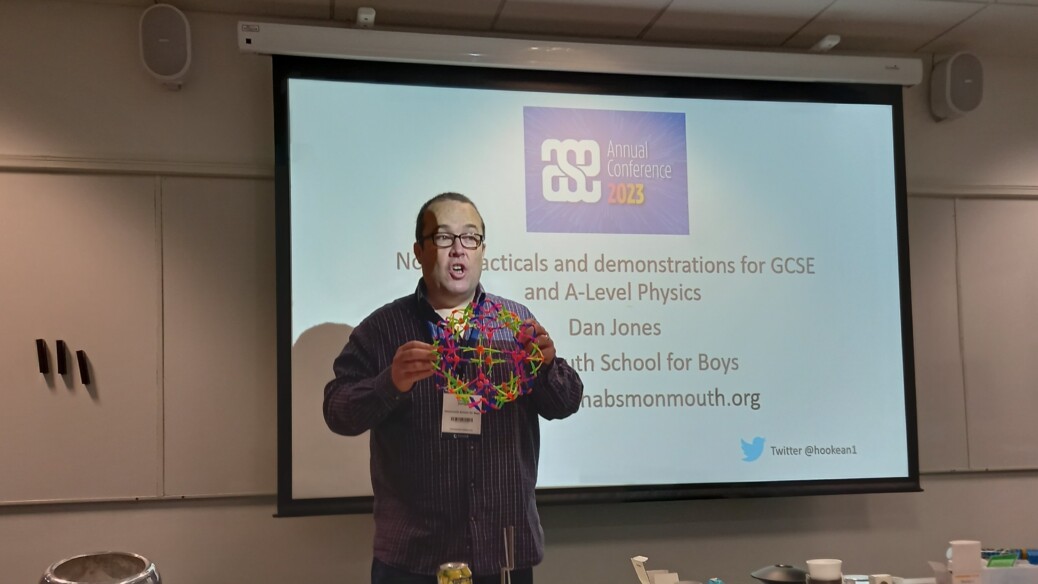 An inspirational Physics teacher has represented Haberdashers’ Monmouth Schools at Europe’s largest Science Education conference.
Dr Dan Jones, Head of Physics at Monmouth School for Boys, delivered a fascinating talk on novel practicals and experiments in GCSE and A level Physics.
Dr Jones felt honoured to be invited to speak by the Association of Science Education (ASE).
He was also a member of an academic panel that discussed how to make the most of practical work in school Science, at the conference which took place at Sheffield Hallam University.
Last autumn, Dr Jones, who lives in Monmouth, was recognised in the Institute of Physics (IOP) 2022 Teachers of Physics Awards.
The IOP described Dr Jones as having worked ‘tirelessly to encourage the most able and those who are intellectually curious, inspiring both girls and boys to choose physics as their one science subject.’
He helped colleagues and peers during the Covid-19 pandemic and has more than 12,500 followers on Twitter where he promotes Physics and teaching in general.
Earlier in 2022, Dr Jones, who previously taught at Brynteg Comprehensive School in Bridgend, which he also attended as a pupil, won the STEM Learning Teaching Award for Excellence in STEM Teaching – Secondary category.
An online article on the IOP Awards page said: “Dan is an exceptional teacher who shows outstanding commitment to his pupils.
“He gives up an enormous amount of his time outside of lessons to support the less able students in physics.
“Dan has helped dozens of trainee and early career teachers over the years as well as supporting other colleagues and technicians.”