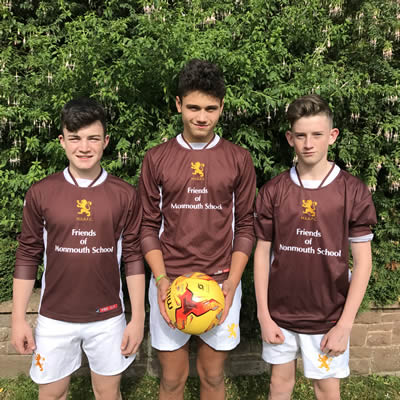 Three talented footballers from Monmouth School for Boys will be representing Newport County this season.

Seb (middle) has been selected for Newport County Under 15s Academy, with Sam (left) and Alex chosen for the club’s under 15s development squad.

All three teenagers were part of Monmouth School for Boys’ successful under 14s team who were undefeated last term.

The trio were spotted by County while playing football at the school and shone during summer trials with the League Two club.

“I am extremely proud of Seb, Sam and Alex after negotiating the summer football trials at Newport County and for successfully making it through to the development and academy teams,” said Master in Charge of Football at Monmouth School for Boys, Mr Tamplin.

“Even more astonishing is that all three boys play for the same school team, which was last season’s undefeated under 14s side.

“Seb and Sam are prolific goal-scorers, while Alex is an accomplished playmaker from midfield.

“It shows that the boys have a genuine opportunity to progress if they play consistently well for the school. Hopefully, more boys from the school will now follow in their footsteps.”

Seb, who lives near Ross-on-Wye, is hoping to have another fruitful season after scoring more than 30 goals last term.

“I have scored seven goals in four games so far and hopefully I can continue with that form because I scored 33 goals last season.”

Sam, who lives in Monmouth, is also an accomplished cricketer and is fresh from a fine campaign with Gloucestershire Under 14s boys.

Sam said: “My football trials got a bit interrupted by my cricket this year. But we had quite a few trials from July through to the end of August when they picked the squads.

“I played cricket for Gloucestershire Under 14s in the summer and it was quite successful.”

He added: “We have a good team at the school. We have quite a strong year group so I am excited about playing football for the school in the coming years.”

Alex, from Bristol, attended training and for Newport throughout the summer.

“I play football every Sunday in Bristol and for Newport on Saturdays when I have the chance,” said Alex, who supports Bristol City and Stoke City.

“The Newport County set-up and training is very good and I am looking forward to getting involved with the team.”