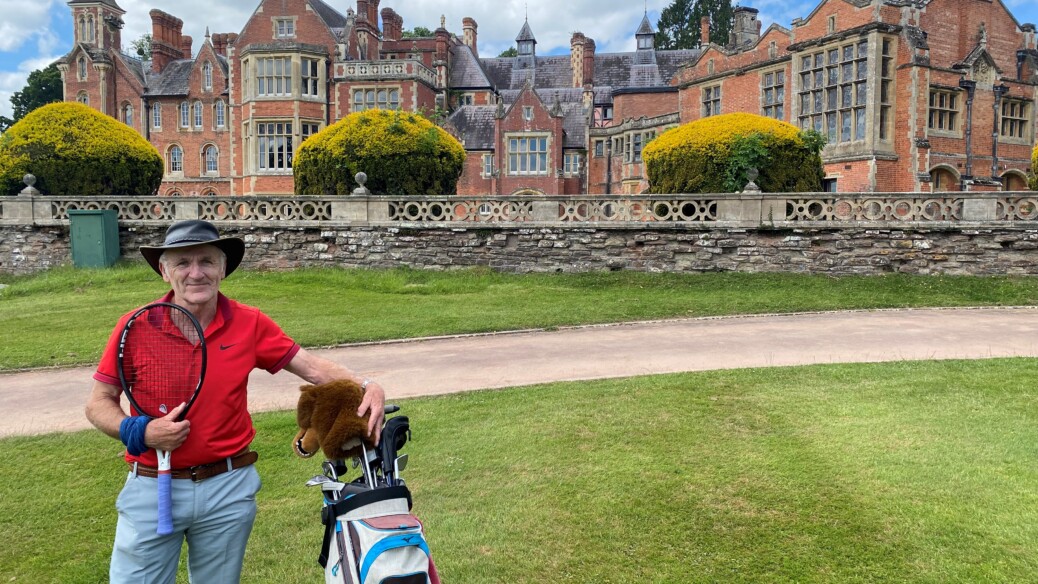 A well-known and popular schools’ tennis coach is urging men to take a simple health test after overcoming his own brush with cancer.
Chris Davis, the Head Coach at Haberdashers’ Monmouth Schools Tennis, discovered that he had prostate cancer after a routine blood test revealed his prostate specific antigen (PSA) levels were higher than expected.
“It was a huge shock to me and my family,” recalls Chris. “Fortunately, I am a fit man, and I have a wonderfully supportive family, but I was faced with a major challenge that I was not expecting.
“It was very frightening for all of us, and I was fearful of what may lay ahead, especially as I had not had any symptoms at all. We all went through a very difficult eight months together.”
Chris, an LTA Senior Club coach who has been recognised for his outstanding service and dedication to the sport by the Lawn Tennis Association, lost one of his sisters to cancer at the age of 60.
“Prostate Cancer is now the most commonly diagnosed cancer in the UK, killing one man every 45 minutes,” says Chris, who taught tennis for 26 years at Five Acres Leisure Centre in Coleford.
“Four men in my own family have had prostate-related issues and each were diagnosed through regular PSA tests.
“But I have been surprised by the general lack of knowledge of this common cancer in men.
“Men’s health is high on the agenda for a good reason because it’s so difficult for the majority of us to be honest and open.
“I would like to raise awareness and help others to feel comfortable and safe to talk about, and face up to, this serious disease.”
Due to the swift action of a local Monmouth GP, Chris promptly saw a specialist urologist consultant, who confirmed he had prostate cancer.
Although the cancer was aggressive, fortunately early detection and amazing care by NHS staff in Newport and Cardiff resulted in Chris having a radical prostatectomy, a major operation to remove the prostate gland and tissues surrounding it.
Chris was operated on in September last year and, through his own courage and determination, and the fantastic support from his wife, Judy, and their children, Hannah and Adam, he has made a full recovery.
He was back playing golf and coaching tennis – his biggest passion – in November.
Indeed, Chris is now celebrating his 50th year in tennis coaching and he has no plans to retire from the sport he loves.
He has coached hundreds of players in a range of settings, including local tennis clubs, primary and secondary schools.
Chris is keen to stress that men can routinely have a PSA test if they are over the age of 50.
A sample of blood is taken and sent to a laboratory to be tested. PSA is a protein produced by normal cells in the prostate and also by prostate cancer cells. It’s normal for men to have a small amount of PSA in their blood, and the amount rises slightly with age and as the prostate gets bigger. A raised PSA level may suggest a problem with the prostate, but not necessarily cancer.
Now that Chris has learned more about prostate cancer, he is determined to raise awareness of this condition among the wider community – and is urging men to have a simple PSA test.
He is now attempting a 15-hour golfing marathon, called The Big Golf Race, at his local club, The Rolls of Monmouth, in which he will play four rounds on Monday 11th July.
“I will be covering 26 miles in total and, hopefully, I will strike the final putt before nightfall descends,” says Chris who, in his 50s, ran three London Marathons to raise considerable funds for Children with Cancer UK.
Chris is aiming to start the first round at 5am; second at 9am; third at 1.30pm and the fourth at 5.20pm.
“Above all, I want to raise awareness of this common but dangerous disease in men and promote a positive message to get tested,” says Chris.
“Many men can face life-changing effects from this disease which is why it is so important to raise awareness and much-needed funds for Prostate Cancer UK,” adds Chris, the driving force behind the successful Haberdashers’ Monmouth Schools Tennis programme.
To support Chris in The Big Golf Race to raise money for Prostate Cancer UK, please visit: https://www.justgiving.com/fundraising/the-big-golf-race-2022-17320