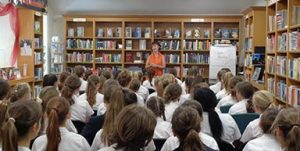 Storyteller Cat started off the session – held at Monmouth School for Girls Library – by re-enacting a South African story from the Zulu people. Entitled Methoni and the River Goddess, the tale was humorous, grisly in places and attention-grabbing from the start. Cat thrilled her audience with the story, which featured a pebble and a strong moral.

“Stories like that are full of symbolism and meaning and life is like that pebble in the story”, she said.

“Sometimes you have to throw it over your shoulder, don’t look back and get on with your life.”

Cat also talked about how she got into writing and how she always wanted to be on the stage. She has been story-telling since 1998 and started writing books after children asked her to write her stories down and sell them during school visits.

She spoke of her first book – Barkbelly – and a later book that involved a re-telling of the Pied Piper. Her latest book – The Hairy Mary’s – was written about a group of Year 7s who desperately want to be in a school play, but discover the teacher will only give parts to boys.

Lastly, Cat explained how book covers were chosen and how the cover of her book will soon be changing. She invited pupils to design one and send it to her, with the chance that it might be picked to be the actual cover!

Speaking after the event, Year 7 student Carmel said: “It was captivating! She was really interesting and a really good story-teller.”