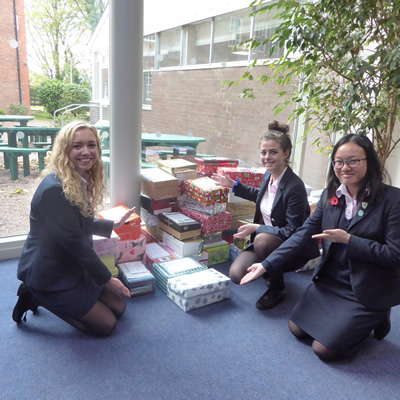 Kind-hearted students from a Monmouth school have collected teddy bears, toothbrushes and notebooks for poverty-stricken people in Eastern Europe.

Link to Hope is a Christian charity which provides love and support to people in Romania, Bulgaria, Moldova and Ukraine.

Year 11 student Elinor, who is the Confidence4Life charity Upper School Monitor, said: “We supported the appeal because we all know it will have such a big impact on the people who receive it.

“We collected items such as teddies, toothbrushes, notebooks and pens and we know they will bring joy to children and adults in Eastern Europe.”

Teacher Mrs Griffiths says the school has supported the charity, formerly Link Romania, since Paddy Curtis and Chris Ward sold cakes and chocolates during break to raise money for items.

“Miss Johnson kindly extended the appeal to the whole school charity in her role as C4L Charities Coordinator, which has been brilliant,” said Mrs Griffiths, a Modern Foreign Languages teacher.

“This year we collected the highest number of shoeboxes ever – nearly 100.”

Mrs Griffiths has a close association with The United Reformed Church in Gilwern near Abergavenny, which added around 40 boxes of its own.

Daphne Haig, from St Peter’s Church in Newnham-on-Severn, visited the school with her husband Nigel to collect the shoeboxes on behalf of Link to Hope.

Mrs Haig said: “Monmouth School for Girls has passed on 92 boxes, which is a fantastic amount.

“These boxes mean so much to the families, children and elderly folk who receive them in Eastern Europe.

“It is very humbling to know that even a bar of soap is so special to them and a small toy could be the only toy some of the children ever have.” 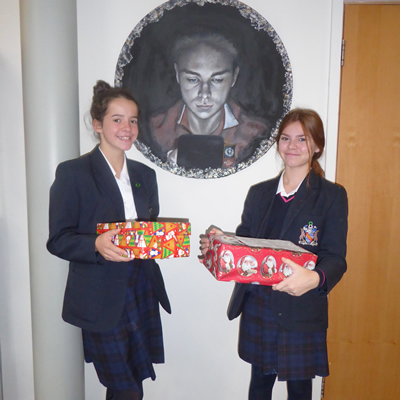 Harriet and Amber with their gifts for Link to Hope.