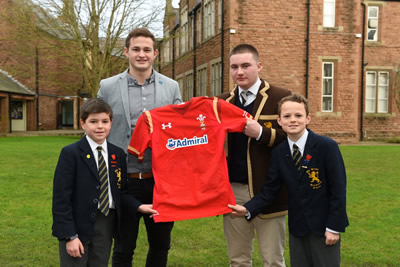 Hallam Amos made a surprise visit to school in January.

Former Monmouth student Hallam Amos has been named in the Wales Sevens squad to compete at the Commonwealth Games next month.

The international full-back/wing has got the call for next month’s tournament on the Gold Coast in Australia that pits Wales against Olympic champions Fiji.

Hallam, a former Head Boy at Monmouth School for Boys, has played 15 Tests for Wales.

Hallam, who enjoyed seven years at Monmouth, had an impressive autumn series for Wales, notching tries against Australia and Georgia and setting up scores against New Zealand and South Africa.

Wales have been drawn against world number two nation Fiji, Uganda and Sri Lanka in the group stages on Saturday, April 14 with the knockout stages the following day.

At the end of January, Hallam, 23, made a surprise visit to his former school and spoke to the boys in morning assembly.

Hallam handed out Monmouth School for Boys’ end-of-season rugby awards, and presented a Welsh jersey to the Captain of Rugby, Alexi.

The Old Monmothian plays his club rugby for Dragons in Newport and is in his fifth year studying medicine at Cardiff University. 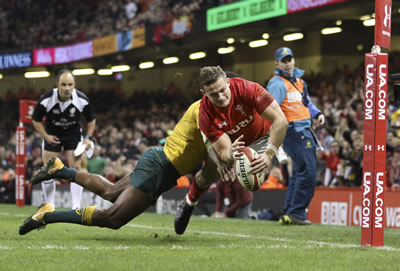 Hallam Amos dives over for try against Australia in the autumn.