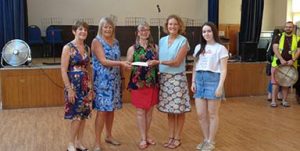 Year 9 pupils have raised an amazing £800 for a local Social Group.

The wonderful sum was raised as the culmination of a special volunteering event over the years where students have helped out at the local Social Circle event every Thursday.

Held at the Bridges Centre in Monmouth, the Social Circle hosts a friendly and welcoming gathering every week for members of the community. The money was raised during a variety of fundraising events held by Monmouth School for Girls throughout the year, including a disco.

The cheque was formally presented to Ann Brankley of the Bridges Community Centre by Kate Callaghan of Monmouth School for Girls, at a special Inter-generational Tea Concert held as part of Monmouth Literary Festival. Members of the Social Circle, the Tea Dance Group and Overmonnow Primary School pupils were all invited to the event, which saw pupils perform readings, drama extracts and musical recitations. Pupils from Osbaston Primary School also performed a penny-whistling recital at the event, which was very much enjoyed by all involved.