A teenager, who leads from the front, has received a prestigious honour for his outstanding role in the Combined Cadet Force (Army section) at Haberdashers’ Monmouth Schools.

Edward, a Cadet Lance Corporal, is a bright and upcoming young leader and has been appointed to the role of Lord-Lieutenant Cadet for 2021.

Edward was recognised by Her Majesty’s Lord-Lieutenant of Gwent, Brigadier Robert Aitken CBE, along with three other teenagers at a virtual awards ceremony.

Edward’s new role will last for a year and includes attendance with the Brigadier, who acts as the Queen’s representative, at official engagements such as Remembrance events and Royal visits.

The 17-year-old was nominated by his school and has received the Lord-Lieutenant’s Certificate and Badge for being a representative.

“Edward has been fantastic with the younger cadets and has shown great promise with his teaching which he has stepped up to easily a year early,” said Captain Andrew White, Contingent Commander at Haberdashers’ Monmouth Schools. 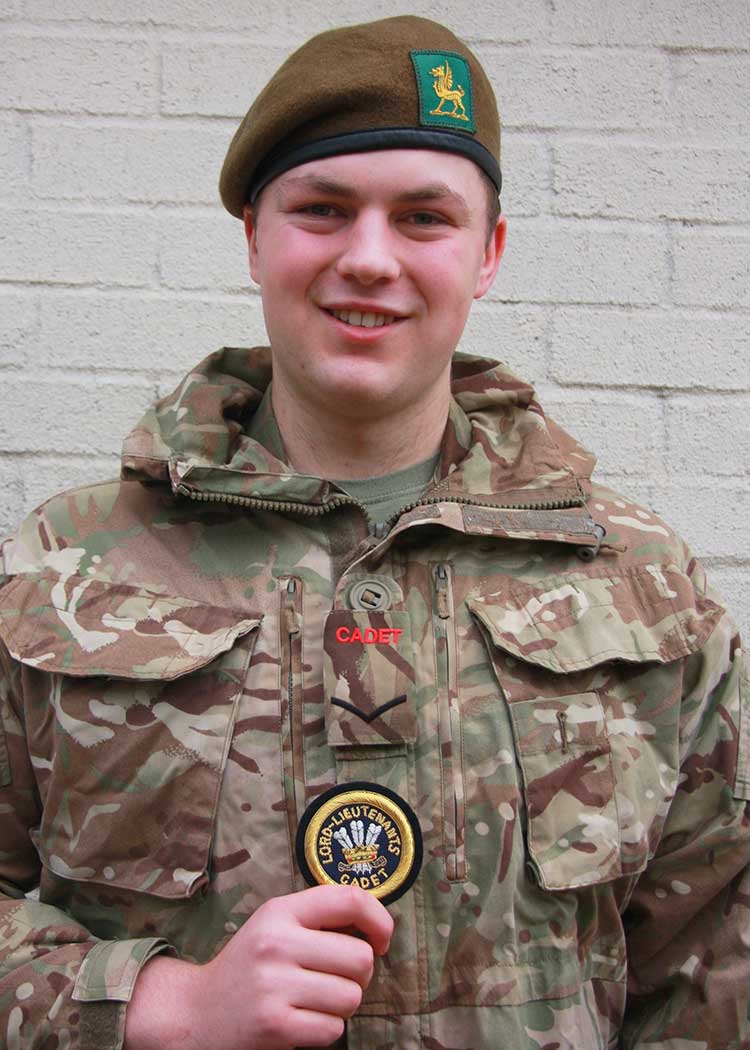 Edward is a Year 12 student in Monmouth Schools Sixth Form and studying A levels in Maths, Further Maths, Physics and Chemistry.

He is hoping to either read engineering at university and then join the Army post-degree, or direct his efforts immediately at Sandhurst or the Royal Marines.

Captain White said: “Edward has been a valued member of our Combined Cadet Force (CCF) for over two years and has made every effort to get as much out of the organisation as possible.

“As a recently-appointed Lance Corporal, Edward has accelerated his leadership skills by delivering lessons where he has been able to impart his knowledge of basic and advanced CCF Infantry syllabus to the junior cadets in his charge.

“Outside of lessons, Edward is a keen rugby player and on top of his school sporting commitments he trains with the Dragons Academy in the Under-18 squad.

“His physical fitness and strength alongside his agility of mind are certainly developed here which transfers to his capabilities in the cadet world.

“Before lockdown, Edward was a very strong member of this year’s Cambrian Patrol Team.”

Captain White, who teaches at Monmouth School for Boys, added: “Edward is a most affable young man and his willingness to apply himself is a good indicator that he will be a highly impressive, successful cadet in the near and distant future.

“He is a most suitable candidate and his appointment to the role of Lord-Lieutenant Cadet comes with our highest recommendation.”