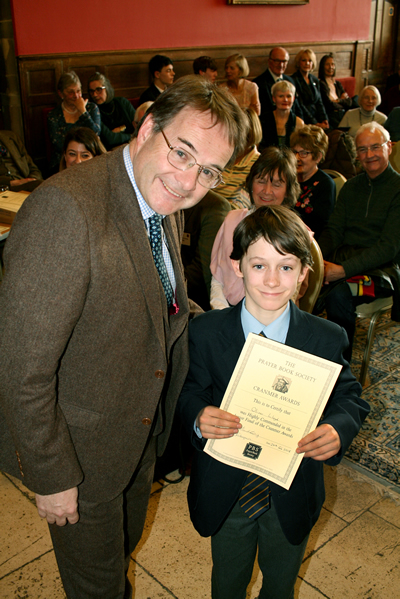 A pupil at Monmouth School for Boys has received a Highly Commended certificate in the finals of The Cranmer Awards.

Oliver, aged 12, recited passages from The Book of Common Prayer in front of an audience of more than 100 people at Old Palace in Worcester.

Run by the Prayer Book Society, the national contest introduces young people to the 1662 Book of Common Prayer created by Thomas Cranmer, Archbishop of Canterbury, during the Reformation.

Oliver, who progressed through local heats, memorised the Collect, Epistle and Gospel for the Accession Service for the finals.

The Reverend Clifford Swartz, Chaplain of Haberdashers’ Monmouth Schools, said: “Oliver recited portions of the Service on the Anniversary of the Accession of the Reigning Sovereign at the competition in front of an audience and judges, and was a credit to himself and the school.”

Oliver received his certificate from Herefordshire-based journalist, theatre critic and author Quentin Letts who described the Prayer Book as ‘a deep well of history, poetry and philosophy which teenagers relish’.

Deeply rooted in the Bible, The Book of Common Prayer is the traditional service book of the Church of England and contains its official teaching.