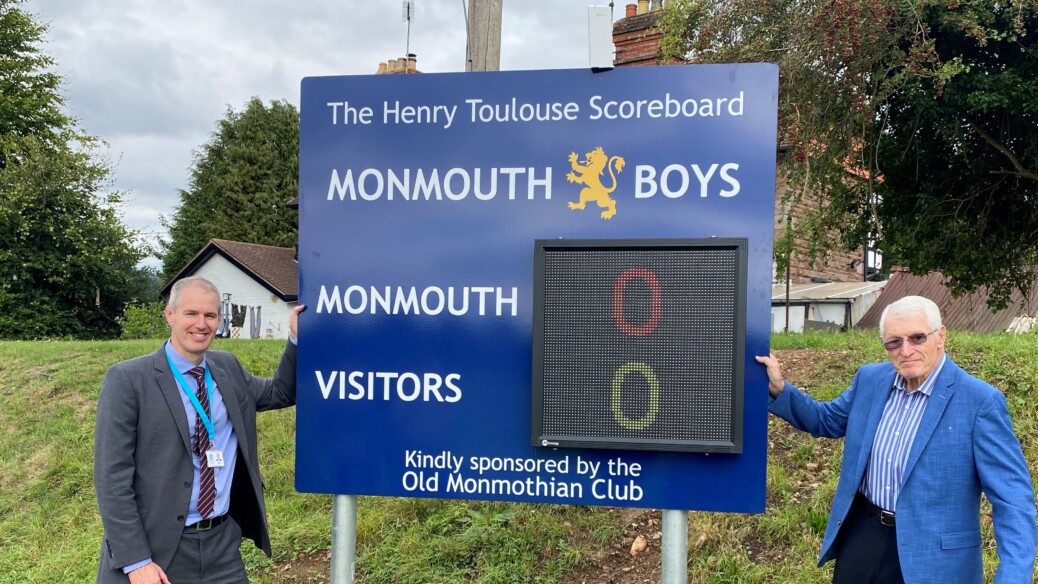 A new rugby scoreboard in honour of a beloved Old Monmothian has been officially unveiled by the man who scored one of Wales’ greatest-ever tries.
Keith Jarrett, also a former student at Monmouth School for Boys, unveiled The Henry Toulouse Rugby Scoreboard sponsored by the Old Monmothian Club.
Mr Toulouse, who died in August 2016, attended Monmouth between 1942 and 1947 and gave 40 years to collecting and maintaining the names and addresses of OMs.
In the 2008 edition of The Monmothian, Mr Toulouse announced that he would occasionally be absent from the 1st XV touchline since he had reached an age where he should “stop gallivanting off on long journeys, braving storms etc.”
Remarkably, Mr Toulouse never missed a home match, while he wrote a wonderful book on the history of rugby at Monmouth from 1873-1998.
Mr Jarrett, now 74, returned to Monmouth for the special occasion having created his own piece of rugby history.
Mr Jarrett, who studied at Monmouth from 1959 to 1966 and was in School House, scored a breath-taking solo try on his debut for Wales against England in April 1967, when he was 18.
Playing at full-back, a position in which he was not familiar, Mr Jarrett caught the ball deep in his own half, ran the length of the pitch before side-stepping all opposing players who tried to stop him.
Besides scoring a try, Mr Jarrett kicked two penalty goals and five conversions for a haul of 19 points.
His performance on the field was so special that the match has been known ever since as the Keith Jarrett match.
His free-flowing individual score has been voted seventh in a poll of the top ten Welsh tries.
Mr Jarrett, now 74, made 10 rugby union appearances for Wales, scoring 73 points, and represented the British and Irish Lions in South Africa.
He also represented Wales at Rugby League and at club level for Barrow. He also played cricket for Glamorgan.