Players from all three teams at Haberdashers’ Monmouth School for Girls went home winners after the event on Tuesday night.

The league, which has been running since 2006, features 14 squads from Monmouthshire who compete in weekly fixtures at HMSG and Monmouth Leisure Centre.

Pippa Williams, who coaches the 3rd VII netball team at HMSG, said: “Following a near-perfect season, with only one defeat (to Usk 1) the 1st VII claimed the top spot for a fourth consecutive season.

“The team went on to beat Usk in the second leg of the season in an exciting fixture resulting in a win, which secured them the Division 1 title.

“The team, comprised of Year 11, 12 and 13 pupils at the school, thanked the members of the Wye Valley League for letting them be a part of the successful season and said the weekly fixtures against competitive local teams had been an integral part of their netball development over the years.”

HMSG’s 2nd and 3rd VII sides both played in the 2nd division of the Wye Valley League.

Miss Williams added: “The 2nd VII, captained by Year 13 pupil Milly, finished the season on a high, winning a very impressive five games on the bounce. On three of those occasions they doubled their opponent’s score and once celebrated a 60 – 10 win over Monmouth 4.

“The squad, again made up of Year 11, 12 and 13 pupils grew stronger week on week and it  became clear to see why so many of the girls will be moving up to the 1st VII next season.

“However, an incredibly tense game between the HMSG 2nd and HMSG 3rd teams resulted in an unfortunate loss for the squad and meant they finished runners up of Division 2.”

The 3rd VII, comprised of Year 9 and 10 pupils – and the youngest of the teams in the Wye Valley League – were undefeated in the second half of the season, winning the Division 2 Plate title. 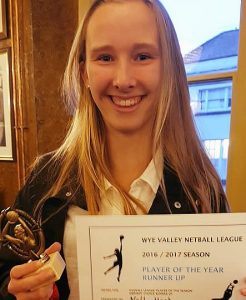 “The girls had a tough start to the season with some heavy defeats, but as they developed as a team and transferred their training sessions to the court, the young team flourished and finished win an almighty 47 – 9 win against Severn Sapphires,” Miss Williams added.

“A special mention must go to Nell of Habs 3 who missed out on the Wye Valley League Player of the Year award by just one nomination.

“This award is nominated weekly by the umpires and is tallied up at the end of the season. For Nell, as a Year 10 pupil and one of the youngest members of the league, this is a hugely impressive achievement and one that everyone at HMSG is incredibly proud of.”

Congratulations to the teams!