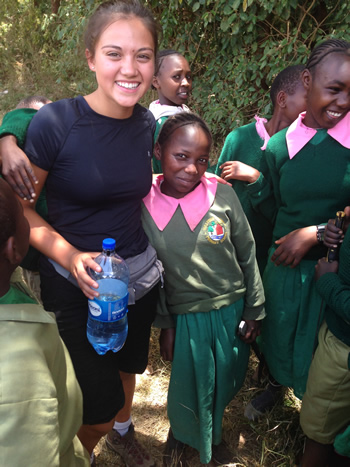 A former Monmouth School for Girls pupil has left a legacy to support orphaned children in two parts of Nairobi after a life-changing experience in Kenya.

Nineteen-year-old Tilly Lawson, from St Owen’s Cross near Ross-on-Wye, launched a scheme to build a chicken coup in Nairobi with money raised during a Christmas appeal last year.

The coup now houses more than 250 chickens, allowing the orphanage to collect the eggs which are then being sold in the street.

“I wanted to start a sustainable project that would be able to provide constant support to the orphans over a long period of time,” explained Tilly, who is due to start reading business and economics at the University of Exeter next week.

And the teenager, who left school last summer, also bought mattresses and blankets for another orphanage in Nairobi.

Tilly booked her trip to the East African country after being granted a Powell Travelling Bursary which was funded by the Haberdashers’ Company.

Tilly volunteered with a charitable organisation, Marafiki Community International, and the first few weeks at the orphanage in Nairobi were the hardest of her life.

Her placement started at Dada Education Centre, where 200 children attended school and one quarter of the pupils were orphans.

The teenager taught science, mathematics, English and PE to children aged from nine to 16 years old for several months.

“The state of the classrooms and the school system was appalling and physical abuse as a punishment was completely normal,” she said.

Despite the poor conditions, the children had a passion to learn, were curious and wanted to do their best.

“Very quickly, the long hours spent at school felt much shorter and I was staying until late and visiting on weekends,” she said.

“We were constantly doing activities like dancing, drawing, singing, playing games and cooking and the happiness in the children’s faces gave me such a joy and it became addictive.

“The first main lesson I learnt was patience and endurance. I needed to give things time and as hard as it was, I felt completely comfortable in my new surroundings and began absolutely loving my experience.”

During her time in Kenya, Tilly did a variety of tasks in the community, including painting the interior of schools, cooking for street children in Nairobi and organising medical check-ups.

She visited an orphanage in a large slum called Kawangware and the conditions stunned her.

“The cold stone floor space was a bed for more than 30 children, and there was no bathroom or kitchen and the meals prepared were very simple, possibly meat once a month and rarely any fruit.”

This discovery led to a huge push on Tilly’s Christmas Project where she aimed to raise £900 for mattresses, blankets and gifts. In fact, she eventually raised more than £3,000.

“I was completely overwhelmed with Monmouth School for Girls’ involvement and the constant support,” she said.

“My school house, Mather Jackson, donated a very generous £200 of their charity money towards the project.

“The children were amazed and appreciative of the gifts and bedding.

“Giving to others gave me such a delight and happiness that I had never felt before. Despite not receiving any gifts for Christmas it was the best festive season I had ever had.

“For my second lesson, in a small way, I now understand Mahatma Ghandi better when he said the best way to find yourself is to lose yourself in the service of others.”

Funding also allowed Tilly, a former Walford Primary School pupil, to travel beyond Nairobi to the middle of Maasai land.

The volunteers lived in mud huts without electricity as they built two new classrooms in a school. They spent hours mixing sand and cement with shovels and used picks to dig deep trenches.

“The third lesson I learnt was that happiness is so simple,” said Tilly, who won the Youth Champion volunteer honour earlier this year at The Herefordshire Community Champions awards.

“We had no phones and no contact with the outside world. We weren’t earning or spending money but we just had each other and I was truly happy.”

Tilly, who turns 20 in November, admits her time in Kenya has changed her perspective of life in the UK.

“It became clear to me how fortunate I am in my education and the skills I have learnt,” Tilly said.

“I would like to thank Monmouth School for Girls for making the amazing and life-changing experience possible.

“It is very easy to get caught up in a fast-paced lifestyle. But it is important to take time to reflect on your values, goals and to value your family and friendships.”