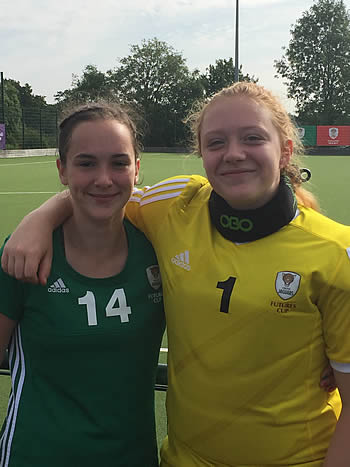 Midfielder Mari and goalkeeper Elin were selected to play for Celtic Jaguars Under 15 girls at St Albans Hockey Club.

The Futures Cup is an annual event for the best junior hockey players in the country, with players selected to represent their regions.

Although the Jaguars lost their three matches, Mari, who holds sport and music scholarships to Monmouth School for Girls, and Elin enjoyed the experience.

Mari was struck in the mouth by a stick in one of the matches but the brave 14-year-old carried on playing, and Elin pulled off some impressive saves.

Mari’s mum, Jayne, said: “It was a great learning competition with a high standard of hockey.

“The two girls experienced what it was like to play sport at an elite level and to live in a village environment with other athletes.”

Mari is a regular member of Gwent Hockey Club and played at first-team level for the school last season.

A creative player, Mari is always heavily involved in the short corner routines for the teams she represents.

Elin, 15, started hockey as an outfield player at Monmouth School for Girls and was converted into a goalkeeper when she was in Year 8.

Elin, who lives in Garway, is on the Aspire Group for Hockey Wales and a regular member of Abergavenny Ladies who compete in the South Wales League.

She has previously won the Welsh Cup at under 13 level with Abergavenny juniors.

Jayne added: “Mari and Elin had the perfect preparation for all their matches and made progress throughout the competition.

“By the team’s last match it was evident that the whole squad had learned a lot and had got used to playing together as a unit.”