A talented Monmouth rower is determined to secure her place in the Great Britain squad for next summer’s World Under 23 Championships.

Pippa England, 19, concluded an action-packed season with a gold medal triumph for GB in a coxless four with Imperial College London at the European Universities Rowing Championships in Serbia.

Now the former Haberdashers’ Monmouth School for Girls pupil wants to further boost her reputation among the sport’s elite.

Pippa, pictured second left, captained Wales and rowed for GB during her time at HMSG. 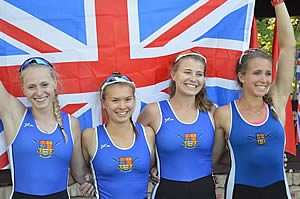 She has drawn inspiration from her success last month at European level.

“I am hoping to trial as a lightweight rower in the 57 to 59 kgs section for the GB Under 23 team,” said Pippa, who has successfully completed her first year studies in biochemistry at Imperial.

“The 2018 World Rowing Under 23 Championships is being held in Poznan, Poland, next July and trying to get into the GB squad will be my main focus for next season.

“The selection process starts in November with the first round of land-based testing on the rowing machine. I will need to complete 2,000 metres in a designated time to move on to the next stage.

“However, if it doesn’t work out, we have pre-qualified as a four for next year’s European Universities Rowing Championships so I could use that to fall back on.”

Pippa, who lives in Monmouth, left HMSG last summer after excelling in her chosen sport.

Pippa raced for Great Britain against France when she was 15 and captained the junior Wales women’s team 12 months ago.

Between the ages of 15 and 18, Pippa rowed each year for Wales in the Home International Regatta.

She also competed annually at the School Head of the River Regatta and was part of a coxed four which tasted gold medal joy last year. 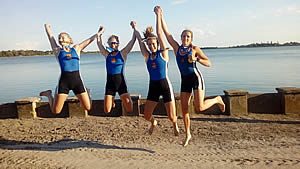 Hereford-born Pippa lived just outside the Cathedral city before moving to Monmouth with her family at the age of nine and is a former Ross Rowing Club member.

She competed for Ross at the age of 10 before starting to row for HMSG three years later.

She continued with her sport in her first year at university and had confirmation of a rowing scholarship at Imperial last autumn.

The teenager rowed competitively for the London university from November to July, also reaching the semi-finals at the Henley Women’s Regatta in an academic four.

Despite living in student accommodation a significant distance away from the boat club in Putney, Pippa’s commitment and motivation to the sport remained strong.

She would set her daily alarm clock for 4.30am to travel across London on the tube for the 6am winter training sessions.

But she said: “I will be living at the boat club in my second year, which will make my life a bit easier.

“I want to work as hard as possible at my rowing next term and living at the club will save me a lot of time.

“I also like life in Putney and I am looking forward to returning to university next month to begin training for the new season.”