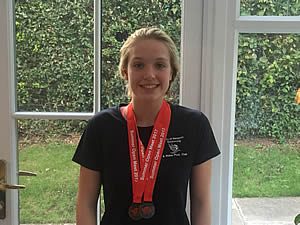 A dedicated teenager has finished her sporting season in style after an outstanding triumph in Swim Wales’ Summer Open Meet.

The Haberdashers’ Monmouth School for Girls pupil is now ranked inside the top three in Wales for the breaststroke in her age group.

Ellie, who lives in Devauden, near Chepstow, also achieved personal-best times in reaching the final of the 100m breaststroke and 200m backstroke.

It was a fitting end to the swimming campaign for Ellie, who is striving hard to secure a place in the Welsh squad for the 15 to 17 year old age group section.

The breaststroke and backstroke specialist swims seven times a week, with land training on top of her work in the pool.

Ellie holds a sports scholarship at Monmouth School for Girls and successfully balances her swimming alongside her academic studies.

Her mother, Karen, said: “Ellie has devoted a lot of time to her swimming to get to the level at which she competes.

“She has always been very dedicated to her training and is focused on doing her very best in the pool.

Ellie took up the sport when she was eight years old and is a City of Newport Swimming and Water Polo Club member.

She previously swam for Chepstow before moving to the high performance centre at Newport, and was part of the Welsh squad last year in the 13 to 15 year old age section.

She will be moving into Year 11 at Monmouth School for Girls when the new term begins next month.

Ellie will now have a short break from competitive action before the long course swimming season gets under way with the Winter Championships in November.