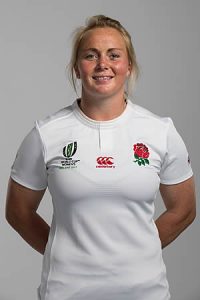 A former Monmouth student has been chosen to represent England at the prestigious Women’s Rugby World Cup in Ireland.

Izzy Noel-Smith, a former pupil at Haberdashers’ Monmouth School for Girls, started for England today in their opening match against Spain in Dublin.

England, the defending champions, ran in 10 tries as they roared to a convincing 56-5 victory in the fixture which was screened live on ITV4.

England face Italy in their second Pool B match on Sunday (2:30pm) before tackling the USA next Thursday (2:30pm).

It promises to be a competitive and thrilling World Cup with the 12 participating teams having left no stone unturned in the build-up.

A forward who plays at openside flanker, Izzy has won 34 international caps for England.

Izzy has played in every England match in 2016 and 2017, including wins against Australia, Canada and New Zealand, with a total of 22 consecutive games.

She scored a late pushover try to give England an 8-3 win over Ireland in the final match of the 2015 autumn series at Twickenham Stoop.

Away from rugby, Izzy, who grew up in Herefordshire, is a trained primary school teacher.

England are the top ranked side at the World Cup and the only full-time professional squad involved.

Only the three pool winners are guaranteed a spot in the semi-finals in Belfast on 22nd August.

The final will take place in Belfast on 26th August.