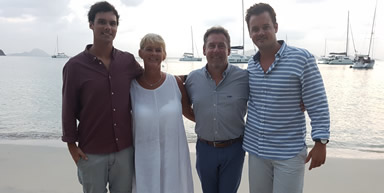 A group of Monmouth students will be creating a splash this weekend in support of a popular houseparent whose family’s home in the British Virgin Islands was destroyed by Hurricane Irma.

His brother, Tim Parsons, mother Gill and stepfather Rob Hales were all on the island of Tortola, the British Overseas Territory in the Caribbean, when the category five hurricane struck.

Now there are fears Hurricane Maria could cause further damage to the British Virgin Islands later this week.

A swimathon is taking place in Monmouth on Sunday evening when around 40 pupils and staff will be attempting to cover 55.7km to represent the surface area of Tortola.

The boarders are making friendship bracelets to sell to pupils, while water bottles are being designed for those participating in the swim.

She is hoping their efforts will raise £500 for the Virgin Unite appeal.

“The house belonging to Sam’s parents (pictured below) no longer exists and they lost everything,” said Miss Williams.

“As the news reports came flooding in about the devastation we heard nothing from Sam’s family.

“Three days after the hurricane first struck we received a voicemail confirming Sam’s family were alive and safe but that the island had been flattened.

“Military supplies have arrived but the British Virgin Islands will take months and years to be restored to its most basic state.

“We felt useless from the comfort of our boarding house and we wanted to do something to help. That’s when I came up with the idea of a swimathon to cover 2,228 lengths of the pool.

“We will try to raise money and awareness of the disaster and send our donations to the Virgin Unite appeal.” 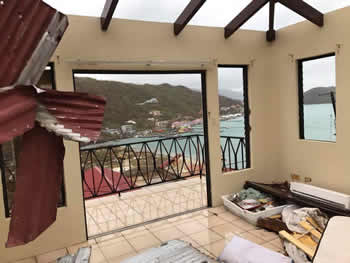 Mr Parsons, 24, grew up near Kingsbridge in Devon and is in his second year at Augusta House after starting as a boarding volunteer at the school.

Mr Parsons’ brother, Tim, relocated to the British Virgin Islands five years ago and is a director of operations for a yacht charter company.

His parents moved out to the Islands in January.

Mr Parsons said: “Thankfully, my family were in a safe building in Tortola when Hurricane Irma struck.

“My mum and stepfather had been hoping to arrive back in the UK later this week before returning to stay with friends and family in South Devon. However, they cannot leave now due to the arrival of Hurricane Maria.”

Mr Parsons added: “Some of the girls at Augusta House did a run at the end of the summer term to raise money for the Teenage Cancer Trust after a patron from the charity visited. They raised more than £700 for charity and we want to raise awareness of this terrible disaster.”

To support the swimathon and, to raise money for the Virgin Unite appeal, donations can be made at: https://www.justgiving.com/crowdfunding/augusta-swim-for-the-bvi