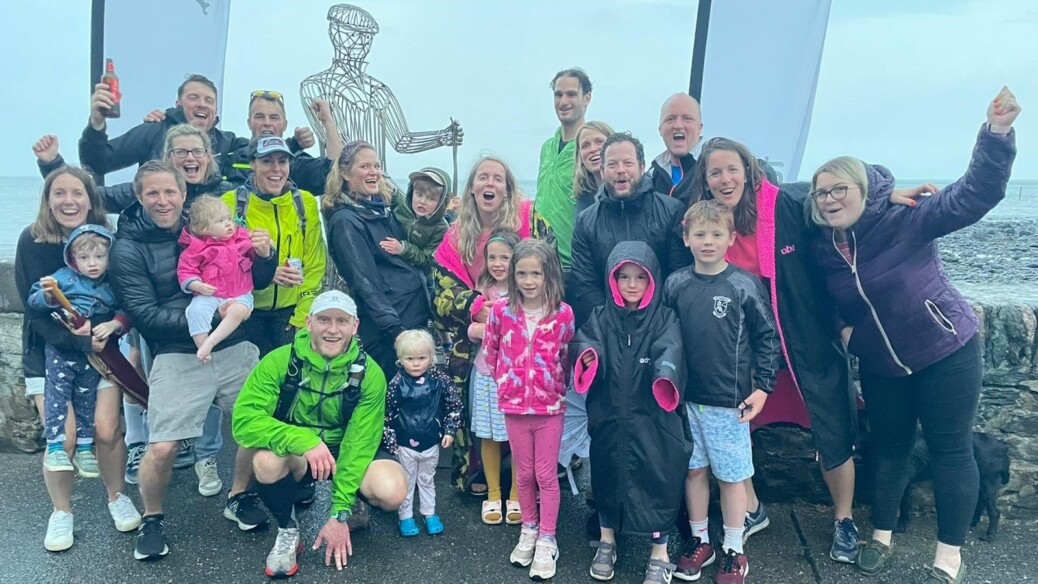 Tom Adams (back row, green jacket), with his family and friends at the finish of his challenge

A group of friends and former students at Haberdashers’ Monmouth Schools have supported Old Monmothian, Tom Adams, who completed the Two Moors Ultra Marathon, raising more than £44,000 so far for The Brain Tumour Charity.
Tom ran the full 117-mile distance from the South Devon coast, over Dartmoor and Exmoor, ending on the North Devon coast.
In 2020, Tom’s son, Barney, was just 13 months old when he began showing signs of balance problems and was not able to support his own weight.
Barney was diagnosed with an ependymoma brain tumour, leading to the youngster having three brain surgeries, chemotherapy and state-of-the-art radiotherapy, called proton beam therapy.
Thankfully, Barney is now a cheerful, charming, three-year-old with a wicked sense of humour.
His three cousins are all pupils at Haberdashers’ Monmouth Schools. His dad, Tom, completed the gruelling race, alongside Nick Wheatley, in just 36 hours.
Tom was given valuable support by fellow Old Monmothians Phillip Hodgkin, Alistair Brooke, James Morgan, Dan Gaunt, Lawrence Price and Nick Russell-Smith, who all left Monmouth School for Boys in 2002; and Old Girl Aly Rowell, who left Monmouth School for Girls in 2002.
Tom, Aly, Dan and Nick Russell-Smith first met when they were just three years old at Agincourt; Alistair and James became friends at The Grange, while Lawrence joined the senior boys’ school at 11 years old.
To make a donation towards fantastic Tom’s ultra marathon effort, please visit: https://www.justgiving.com/fundraising/hannah-tunstall