Dylan walks in footsteps of Royal Family at Westminster 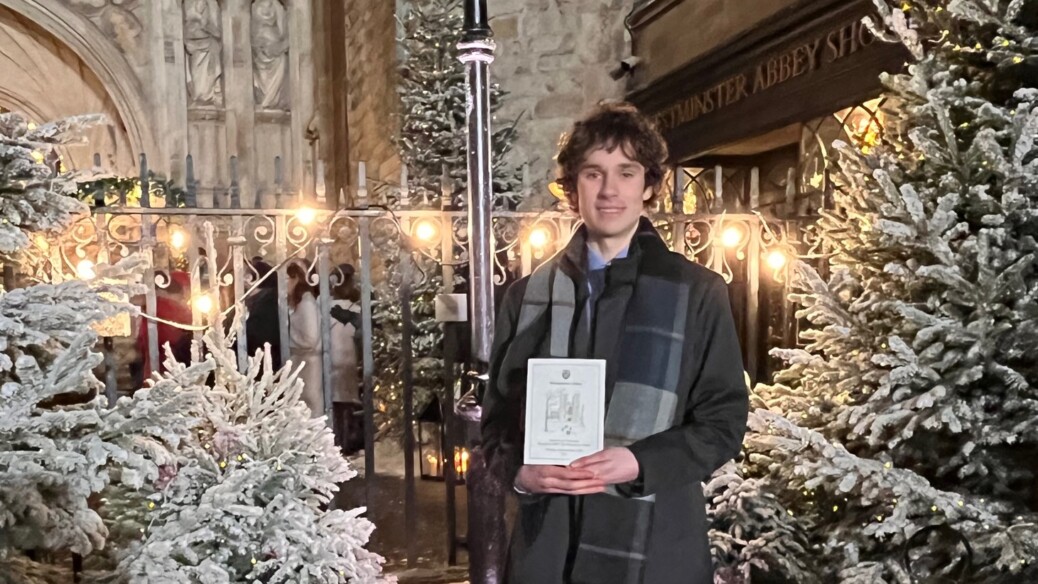 A caring Monmouth schoolboy, who campaigns to reduce the number of gardening injuries to hedgehogs, walked in the footsteps of the Royal Family in a Carol Service at Westminster Abbey.
Dylan had been nominated to attend the Together at Christmas service by the representative of King Charles III, the Lord Lieutenant of Gwent, in recognition of his outstanding volunteering work.
The event will be broadcast as part of Royal Carols: Together At Christmas, a special programme narrated by Catherine Zeta Jones, airing on ITV1 on Christmas Eve.
Back in the autumn, Dylan, a pupil at Monmouth School for Boys, won both the Youth Award and the High Sheriff’s Award at the Monmouthshire Volunteer Achievement Awards 2022.
Together at Christmas was a special tribute to her Majesty Queen Elizabeth II and the values she demonstrated throughout her life, including duty, empathy, faith, service, kindness, compassion and support for others.
Guest nominations, including Dylan, were drawn from Lieutenancies across the UK, alongside community networks and charities associated with Members of the Royal Family, including some of the patronages of Her Late Majesty.
Spearheaded by The Princess of Wales, and supported by The Royal Foundation, the service recognised the selfless efforts of individuals, families and communities across the UK, and celebrated and showcased the joy that human connection and togetherness can bring.
The service saw the world-renowned Westminster Abbey choir perform some of the nation’s most beloved carols, including O Come, All Ye Faithful
There were also musical performances by musicians Craig David, Alexis Ffrench and Samantha Barks, and a special duet from Alfie Boe and Melanie C.
Poignant readings were delivered by speakers, including The Prince of Wales, Dame Kristin Scott Thomas, Hugh Bonneville and Kadeena Cox.
The broadcast will feature additional content including an introduction from The Princess of Wales, films that highlight individuals who go above and beyond to support others, and tributes to Her Majesty Queen Elizabeth II.