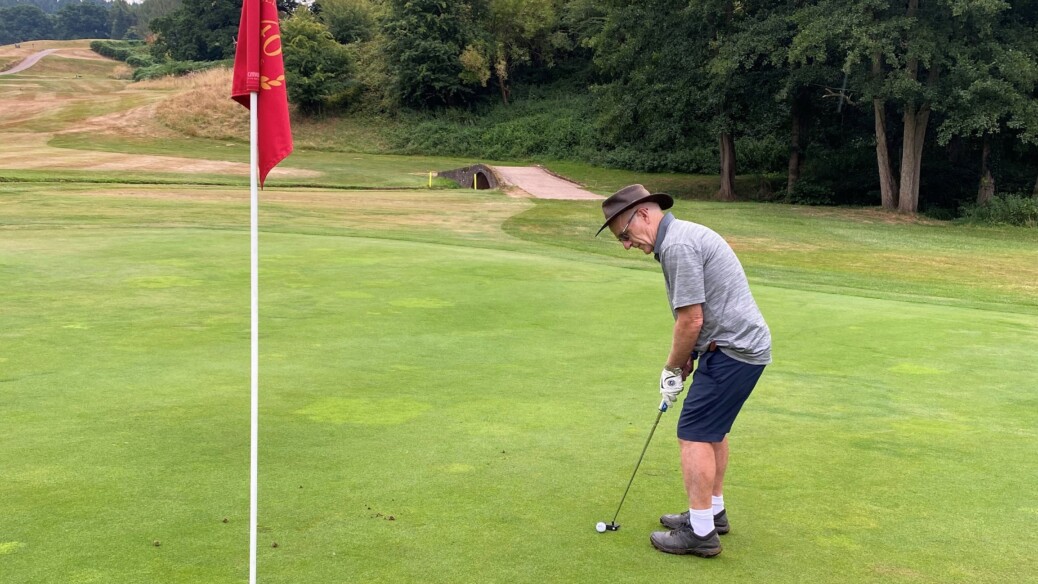 A well-known Monmouth and Forest of Dean tennis coach has completed a 15-hour golfing marathon to raise awareness and much-needed funds for Prostate Cancer UK.
Chris Davis, the driving force behind the successful Haberdashers’ Monmouth Schools Tennis programme, is urging men to take a simple health test after overcoming his own brush with cancer.
Chris, who lives in Monmouth, played four rounds in The Big Golf Race, at his local club, The Rolls of Monmouth, on Monday 15th August, starting at 5.30am.
His challenge had previously been postponed due to the scorching weather conditions and Chris finished his gruelling golfing feat, 72 holes later, at 8.35pm.
On the final hole, a host of senior club colleagues and staff at The Rolls, including the club’s manager, Linda Kedward, were on hand to greet Chris.
“It was a long and challenging day but worth every stroke,” said Chris.
“I have worked out that every shot I played amounted to £11.
“The total raised is currently £3,700, which is fantastic and I want to thank everyone who has sponsored me.”
Chris is keen to raise more awareness about prostate cancer, a condition he discovered he had after a routine blood test revealed his prostate specific antigen (PSA) levels were higher than expected.
Due to the swift action of a local Monmouth GP, Chris promptly saw a specialist urologist consultant, who confirmed he had prostate cancer.
Although the cancer was aggressive, early detection and amazing care by NHS staff in Newport and Cardiff resulted in Chris having a radical prostatectomy, a major operation to remove the prostate gland and tissues surrounding it.
Chris was operated on in September last year and, through his own courage and determination, and the fantastic support from his wife, Judy, and their children, Hannah and Adam, he has made a full recovery.
“I’ve had so many discussions with men about this most common cancer since I announced my golfing challenge,” said Chris.
“The key message of getting a regular PSA test remains as important as ever. This is the message I want to every man in the area over the age of 50 to hear and act upon immediately by contacting their own GP.”
Chris is now looking forward to returning to his usual three-and-a-half-hour rounds of golf and, of course, spending time coaching on the tennis courts in Monmouth and the Forest of Dean.