You are here: Home » Blog » Academic » Sun shines on The Grange’s Prize-Giving ceremony

A successful barrister, who is also a qualified doctor, returned to his old school to give an inspiring speech about recognising the important things in life.

Old Monmothian, Anu Mohindru, was back at The Grange on Friday morning as guest speaker at this year’s Prize-Giving event.

With his proud nephew, Prep IV pupil Roahn, in the audience, Anu told boys, parents, staff and governors how precious his time at The Grange had been to him.

“My previous school told my parents I wouldn’t amount to much, so my parents sent me to The Grange and the rest, as they say, is history.” 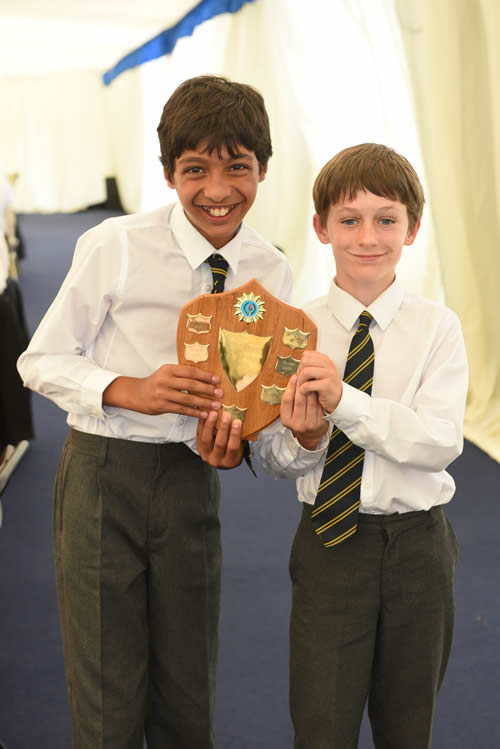 Anu, who specialises in financial crime, brought along the cup he’d won at the 1986 Prize-Giving for Grange Sportsman of the Year – he couldn’t get any more of his school mementos past his mother’s “security system”.

He advised the boys to use their time thoughtfully and imaginatively, to make the most of life, and cherish their families.

“Take each step carefully, travel light and remember the need for something to guide you –  your parents, your friends, your teachers.

“My journey from the Grange has allowed me to encounter many giants who have helped me every step of the way. My biggest giants are my family. Find your giants, they are closer than you think. Let them help you to get further. Enjoy your time here, take every opportunity that you can, embrace it. Set goals and don’t let any power or person deter you. Never forget that, like me, you were made at Monmouth School.”

History was made as Inglefield House girls became part of The Grange’s Prize-Giving proceedings for the first time.

Vocalists from the boys’ prep were joined by Year 5 from their sister school to perform a harmonious rendition of N’Kosi Sikelele Africa.

The schools have been working closely to create more and more opportunities for the girls and boys to unite in social and co-curricular activities.

As well as congratulating the boys on their countless academic, sporting, musical and quizzing achievements during his first year as Headmaster, Neil Shaw thanked Friends of The Grange for their continued support.

The Prep IV pupil quoted Sir Edmund Hillary, who became the first man to climb Mount Everest in 1953 after failing to conquer it the previous year.

“Mount Everest, you beat me the first time, but I will beat you the next time because you’ve grown all you’re going to grow, but I’m still growing,” he read, adding: “We have the freedom to make mistakes, learn from them and develop.”

Enormously proud of his friends, Oliver highlighted a few of their strong points: “My friends have such different and unusual talents inside and outside of school. I have friends who have excelled in trampolining, art, chess, music, horse-riding, swimming, cricket, break-dancing and the list goes on.

“Recently, in the science quiz finals, it turned out the only Prep III boy on the team knew more about dinosaurs than the quiz master himself.

“I was thrilled and proud to become Head Boy, but I also felt I was standing at the bottom of a huge mountain faced with the challenge of climbing it. But then I realised I wasn’t alone.”

Thanking his teachers and schoolmates for the support he’d received throughout the year, Oliver went on to mention his chosen charity, the World Wide Fund for Nature, for which The Grange has raised £3,000 through various sponsored activities this year.

“I will be very sad to leave The Grange, but I know all of us in Prep IV are really looking forward to the next step of our education,” he continued.

“I realise we will be starting this journey again with oversized bags and blazers. None of us will have a clue how to get from classroom to classroom, but I’m certain that all of us at The Grange will be able to climb this next mountain together.”

The whole school delighted guests with a stunning finale – a medley of their favourite songs from recent show, A Sporting Chance, led by their ever-enthusiastic music teacher, Joe Walton.

There were also wonderful speeches by Joff Hamilton, Master of the Worshipful Company of Haberdashers, and Audley Twiston-Davies, Chairman of the Board of Governors.

Prizes were handed out to boys for a variety of outstanding achievements in academics, art, sport, music and exemplary behaviour.