The 11-year-old was the best overall rider for his section in an inter-hunt relay. 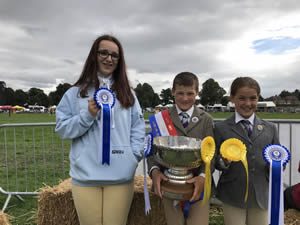 All three riders are pupils at Haberdashers’ Monmouth Schools.

Tommy is moving on to Monmouth School next month after graduating from The Grange.

The trio, also members of Monmouthshire Pony Club, finished third in the inter-hunt relay out of 14 teams after being beaten by the eventual winners of the class.

Tommy was fourth in the pony club’s individual 70cm show jumping category, while Tommy and Megan’s team finished fifth in the team event.