The thrill of making a splash in the Mediterranean Sea was a fitting finish for three friends who conquered a gruelling cycling challenge across the Pyrenees. 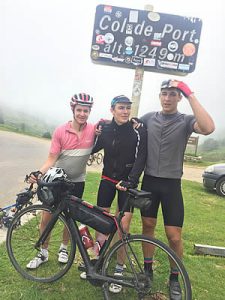 Lucas, Lucas and Adam pushed themselves to the limit in pedalling more than 450 miles in less than 100 hours as part of the Raid Pyrenean.

The Monmouth School pupils scaled memorable heights, including the Col du Tourmalet and the Col d’Aubisque, during the adrenaline-filled four-and-a-half day trip.

Everything went smoothly – apart from an anxious moment in Tourmalet when one boy narrowly avoided a high-speed collision with a wild goat.

Lucas’ dad, Rob, supported the trio with food and directions as they rode the length of the Pyrenees from the Atlantic Ocean to the Mediterranean Sea.

Adam is the cousin of fellow Monmouth School pupil Frank, a former triathlon champion and high level rugby player, who has discovered a new love for music and photography after being diagnosed with hypertrophic cardiomyopathy, a heart condition.

“The amount of cycling was tough and I think we reached places, both mentally and physically, we had never been to before.

“It felt like we were part of a cycling team because we bonded together. We went through the same amount of pain and emotion and could sympathise and empathise with how each other felt.” 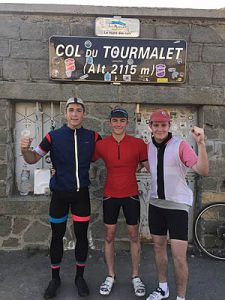 The boys started their journey in Hendaye and, during the challenge, successfully dealt with 11,000 metres of vertical ascent – the equivalent of cycling from Chepstow to Anglesey and back, and climbing Snowdon 10 times.

“Some of the descents were amazing and, collectively, the Col d’Aubisque was our favourite mountain descent,” recalled Adam.

“We cycled from 8am to 9.15pm on some of the days and, at times, it felt like nothing else in the world mattered.

“The other two boys did not have their own bikes until January so they came into the challenge as non-cyclists which made their achievements even more fantastic.

“The most they had cycled previously was 110km and we actually covered 168km on the first day.”

Despite pushing their bodies through the pain barrier during the experience, the boys’ determination and focus did not diminish.

“We always felt in control and were fortunate that we didn’t have to deal with any punctures,” said Adam.

“But on one of the descents, Lucas was almost taken out by a goat.

“We were descending at dusk when two wild goats suddenly veered across the road. Lucas somehow managed to lock his back wheel to evade the goat. But that was the only hair-raising moment.”

The  teenagers eventually reached the finish at St Cyprien in 99 hours and 33 minutes – 27 minutes quicker than the specified time limit for the Raid Pyrenean.

“We did not focus too much on the 100-hour barrier until the last day and we managed to complete it with 27 minutes to spare,” said Adam, who lives in Llanmill, Pembrokeshire, and is a member of Narberth Dynamos Cycling Club.

“It was exhilarating to dive into Mediterranean Sea at the finish – and have a swim at Cerbere. That was probably our highlight.”

All three boys will be starting their final year at Monmouth School in September and haven’t ruled out another epic challenge.

Adam said: “We were thinking that we could tackle a different mountain range in a different country. We also talked about doing Land’s End to John O’Groats but that’s all just speculation at the moment.”