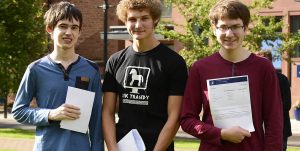 Three leading students at Monmouth School for Boys have expressed their delight after achieving places at Oxbridge.

Sam, who lives in Monmouth, was awarded four A*s in his A levels and will be reading computer science at Cambridge University.

Sam ran the school’s hugely successful altitude ballooning club and said it had always been his ambition to study at Cambridge.

“I would now like to go to Cambridge and never leave,” revealed Sam, who will be attending Robinson College in October.

“I would like to do a PhD and then get a job in academia at Cambridge – that’s my long-term plan.”

Sam achieved his A* grades in computing, further mathematics, mathematics and physics.

Pupils at Haberdashers’ Monmouth Schools gained twice the national average for the top A level grades.

It was a similar success at the girls where a total of 75% were awarded A* to B grades and more than a third (34%) achieved three or more A to A* grades.

James C achieved three A*s and an A in his exams and will study computer science at Oxford University.

James, who lives in Skenfrith, was awarded A*s in further mathematics, mathematics and physics, and an A in computing.

“I have enjoyed computer science since I began coding at the Grange,” recalled James, who is attending Keble College.

“I am delighted to have secured my place at Oxford to study computer science – it is an amazing opportunity and I am grateful to all my teachers at Monmouth School for Boys for all their help in  making my dream possible.”

He added: “I had only two hours sleep the night before as I was so keen to get my results the moment they were available.”

James B achieved three As and will study classics at Oxford University.

The vice-captain of the first VIII rowing team, James was also the leader of the school’s lower strings orchestra. He will attend Corpus Christi College.

“I have been through the whole education system at Haberdashers’ Monmouth Schools and I am ecstatic with my results,” said James, who lives in Osbaston.

“I hope to keep up my rowing and chess at university and all of the things I learned at Monmouth School for Boys.

“I can’t say enough good things about the school because the whole journey has been amazing.”

He added: “I am not entirely sure at this stage what I want to do for a career.

“However, getting entry to Oxford to read classics was my aim and it is an ideal place to continue my studies after a superb grounding at Monmouth.