You are here: Home » News Events » Academic » Outstanding A level results for Monmouth School for Boys

Outstanding A level results for Monmouth School for Boys 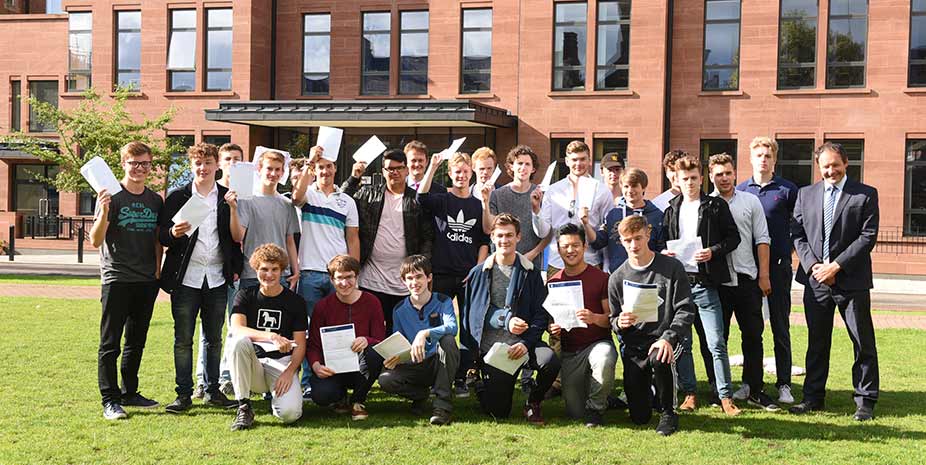 Pupils at Haberdashers’ Monmouth Schools are today celebrating an outstanding set of A level results.

The two schools gained twice the national average for the top A level grades.

Two boys – Sam and Jonathan – achieved a remarkable four A*s in their examinations.

The pass rate at Monmouth School for Boys was 100% which showed the dedication and hard work of Sixth Formers and staff.

Sam, who was the lead for a Minecraft project replicating Monmouth School’s historic buildings, sealed a place at Cambridge University with his outstanding four A* grades. Sam, who lives in Monmouth, also ran the school’s hugely successful altitude ballooning club, will read computer science at Robinson College.

Skenfrith’s James C, who was part of the school’s winning Young Rewired State’s Festival of Code competition, achieved three A*s and an A to seal his place to read computer science at Keble College, Oxford University.

The vice-captain of the first VIII rowing team, James B, was awarded three As to confirm his place at Oxford University.

James, who lives in Monmouth and was also the leader of the school’s lower strings orchestra, will study classics at Corpus Christi College.

Head boy, Joe, from Bettws Newydd, near Usk, will be studying history at Durham University after being awarded an A* and two As.

Deputy Head Boy, Dan, who was also captain of the football team, will be reading international management and modern languages at the University of Bath after achieving three A*s and an A.

Dylan was awarded an A* and two As and will study medicine at King’s College London and Harry, from Magor, will also study medicine, heading to Cardiff University after securing three A*s.

Zelig, from Coleford, who was leader of the upper strings orchestra and a tennis captain, will also be reading medicine, at the Queen Mary University of London, having achieved two A*s and two As.

Dr Andrew Daniel, Headmaster of Monmouth School for Boys, said:  “We are particularly pleased that the boys achieved such outstanding academic results while also contributing with great energy and enthusiasm to the many areas of our co-curricular programme.

“We achieved our best set of results in five years – with 55% achieving A* to A grades, and 76% A* to B. These headline statistics are very strong indeed, and something for the boys and staff to be proud of.”

A level results at Monmouth School for Girls