Identical A level grades for identical twins Oscar and Charlie 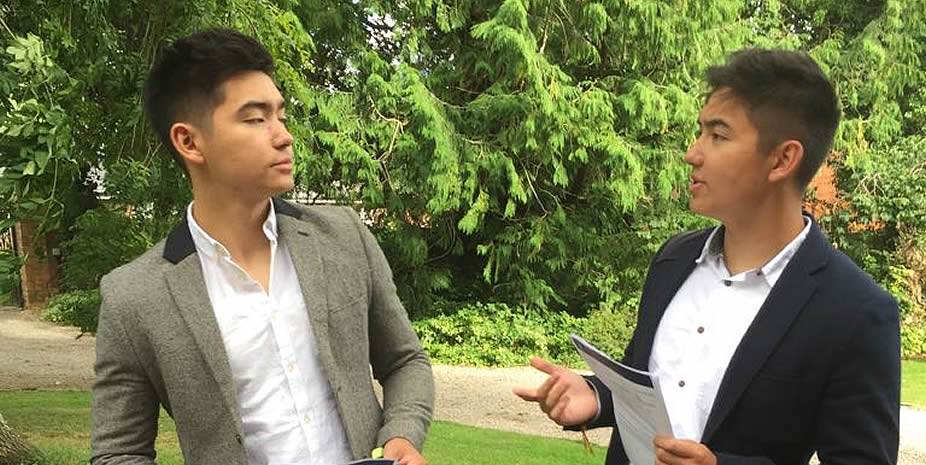 Not even A level results could separate identical twins Oscar and Charlie.

The 18-year-old brothers from Monmouth School for Boys took three subjects at A level, both achieving A*, A, and B grades.

Two years earlier, the boys had each been awarded 7 A* and 3 As in their GCSE examinations.

And now the pair, who live in Ledbury, Herefordshire, will be heading to the University of Bristol next month.

“It must be very unusual,” said Oscar, who will be reading economics and finance at Bristol.

“We got our grades in different subjects but it’s very coincidental that we have ended up with the same A level results.

“Our friends are saying that it’s classic Oscar and Charlie.”

Oscar was awarded an A* in mathematics, an A in economics and a B in history.

Charlie achieved an A* in English, an A in history and a B in Spanish. He will be reading history at Bristol.

Born in Dubai, the twins moved to Herefordshire with their parents Tim and Penny when they were three years old.

They have progressed through the Haberdashers’ Monmouth Model.

“When I opened my A level results on the computer, with my mum and dad at my desk, it was very overwhelming,” said Oscar.

“My mum started to cry with happiness.

“Charlie and me were initially unsure whether we had got into Bristol because my offer was for three As, and Charlie needed an A* and two As.

“But we logged into the UCAS website and found out that we had been successful in getting into Bristol – our first choice university.”

The twins have a wide range of interests and used to play junior rugby at Monmouth Rugby Club.

During the Third Form, the brothers teamed up to swim the combined length of the English Channel in the school pool to raise money for the Savitri Waney Charitable Trust.

Oscar said: “For my work experience in 2015, I went to the Barclays Tower in the City of London and ideally I would like to be involved in stockbroking or bond broking in the city after I finish at university.

“Charlie is studying history and has talked about becoming a journalist. He has written stories in the past for the school newspaper.”

The boys’ father, Tim, is a former pupil at Monmouth School for Boys.

Oscar added: “If I am being honest, I thought that university could have been a good time for my brother and me to go in different directions.

“But we are both going to Bristol. We might be in the same halls of residence but we are taking different subjects.”

Oscar continued: “We both loved our time at Monmouth and want to give a massive thanks to the staff who have helped us all the way in our fantastic journey through the school system.”