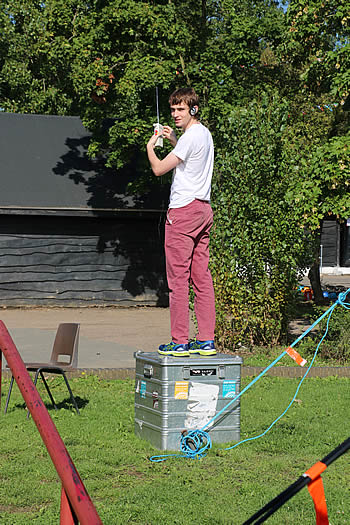 Starring in a navigational challenge to find hidden radio transmitters was a proud moment for a former Monmouth School pupil last week at a major youth summit.

Budding engineer Peter was the first person to build a Morse code kit in another exercise for radio amateurs at YOTA 2017 (Youngsters on the Air).

The 19-year-old, who represented the UK, was among 80 young people from 26 countries at the week-long Radio Society of Great Britain (RSGB) forum in London.

The group also contacted the International Space Station and had a question-and-answer session with Italian astronaut Paolo Nespoli.

“We had a full-time programme of activities and did a lot of things, including trips to the London Science Museum and to Ofcom’s  radio monitoring station at Baldock,” said Peter.

“We made 10,386 conversations during the week and Morse code drove 22 % of all traffic.

“I was among 80 people from all over Europe and it was great to meet radio amateurs like me from other countries and cultures with the same enthusiasm and a common interest.”

Peter used a topographic map, a compass and amateur radio apparatus to find hidden radio transmitters in the fastest time. He was presented with a hand-held radio to mark his triumph.

The teenager also enjoyed the group’s interaction with the International Space Station in which 12 young radio amateurs questioned Mr Nespoli.

However, the group’s initial contact with the astronaut wasn’t smooth.

“Our first contact with the space station was dramatic because we could see the astronaut but couldn’t hear him because the radio in the Columbus module wasn’t working properly ,” explained Peter.

“However, we were grateful to the NASA Flight Director and everyone else involved who allowed Paolo to use the amateur radio in the Russian service module, so that 90 minutes later we could hear him loud and clear from there.”

Peter, who lives in Thornbury and was a day pupil at Monmouth School, has a strong interest in electronics and engineering. He joined an amateur radio club in his hometown three years ago.

Peter will be studying engineering at Swansea University and aspires to work in avionics, an electronics system used on aircraft, artificial satellites, and spacecraft.

Peter added: “I made quite a lot of friends at the summit in London and hopefully I will be able to keep in touch with them. I definitely want to make sure that I carry on the legacy of YOTA.”